The next time you plunk down $100 to get an autographed photo of Norman Reedus or Stephen Amell at one of the numerous fan conventions across the country, just know this: those guys are probably pulling in between $250,000 to half a million from those conventions. And that’s ON TOP of the salary they get from their shows (which is most likely well north of $100,000 per episode.). Don’t get me wrong — I don’t begrudge these guys their chance to make a living…. but c’mon, $100 per photo for Reedus? Or $80 for Amell. That’s highway robbery….except for the fact that fans are shelling out the money in droves, so much that these guys are running off with “garbage bags full of 20’s.” (per THR.com) Dang.

This week’s Hollywood Reporter broke down the economics of these conventions, explaining how many actors REALLY want to land a job on a genre series because of the promise of money from convention appearances. Yeah, it seems like a racket, but hey! If people didn’t pay ridiculous amounts of money for these autographs and photos, then the market wouldn’t be there. One cool glimmer of light, though, was the fact that Andrew Lincoln (aka Rick Grimes form The Walking Dead) gives all his convention income away to charity. Cool dude. 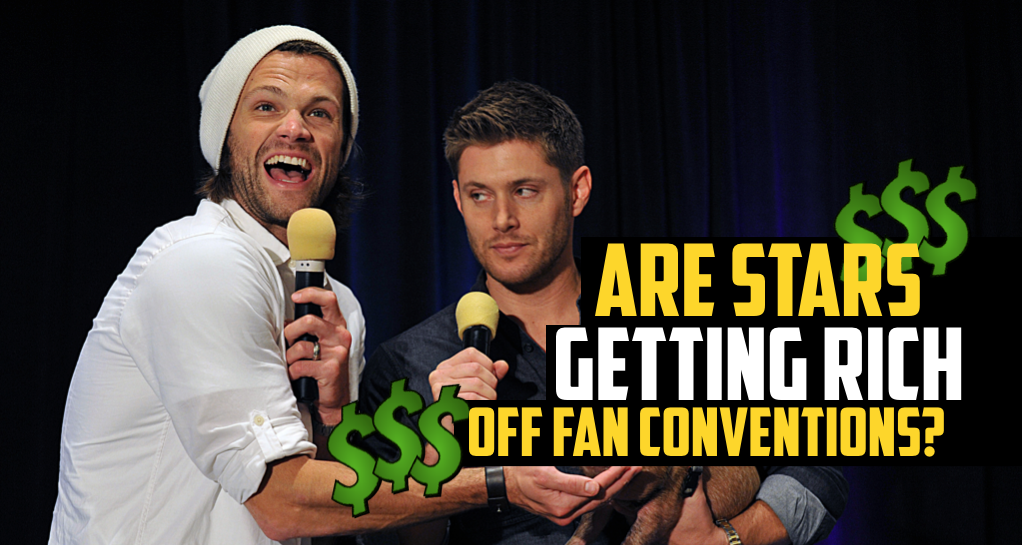 From The Hollywood Reporter >>>
According to multiple sources familiar with convention deals, the basic guarantee rate for genre stars is in the $5,000 to $10,000 range per appearance — with leads on such current TV series as The Walking Dead, Once Upon a Time, Supernatural, The Vampire Diaries, Netflix’s Marvel shows and The CW’s DC Comics fare commanding anywhere from $35,000 to $250,000 and up, depending on their popularity and the frequency with which they appear. At top conventions, it’s not uncommon for a star to earn anywhere from $50,000 to $100,000 on top of their guarantee (more if they spend extra time signing).

Holy $!@%….. that’s not chump change. Apparently, some actors get it written into their contract that they can appear at a certain amount of conventions to supplement their “meager” (yeah, right!) salaries.

From The Hollywood Reporter >>>
For networks and studios, fan conventions also can be a boon for free publicity, though some — like AMC — have toyed with creating their own events to get in on the cash grab for lucrative brands like Walking Dead. Ultimately, say sources, many back down to maintain talent relationships. Walking Dead creator Robert Kirkman is said to have strongly opposed the idea, prompting AMC to retreat from the space. “Not everything has to be monetized,” says TWD exec producer Dave Alpert, who supports Walker Stalker. “What’s important is that the community feels vibrant and engaged. As long as that happens … we should all be able to make a living and the money will come.” Other studios, like Warner Bros. Television, frown at talent accepting payment for appearing at events. (Sources say WBTV pulled out of New York Comic-Con after organizers wanted to pay a handful of their stars.)

It’s interesting to note that Warner Bros pulled out of New York Comic Con, but brought its largest collection of shows ever to San Diego. There are definitely different perspectives and approaches between these two conventions. 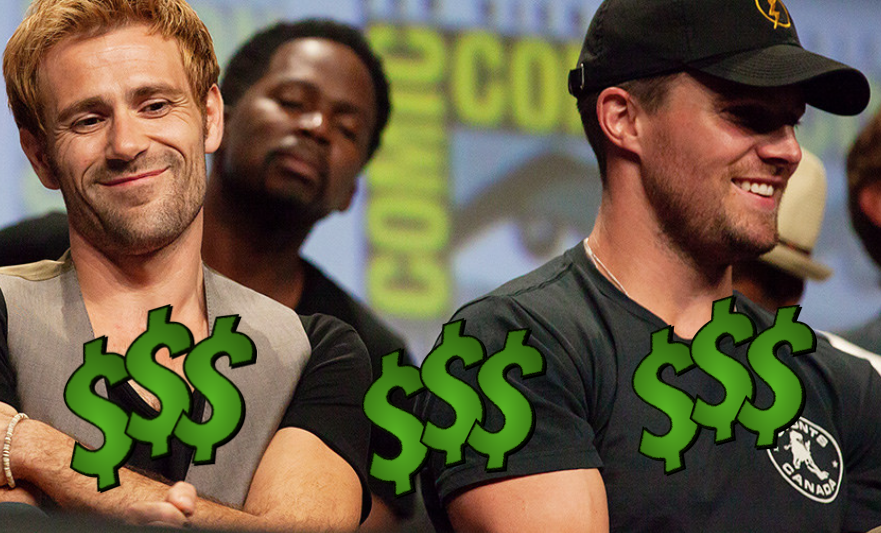 But it’s not all about greed. Sometimes these high prices actually result in something good. Take, for example, what happened in Orlando recently.

According to ComicBook.com >>>
The conventions and their guests aren’t the only ones benefiting from the comic conventions and fan festivals geek culture has come to love. Earlier this month, Walker Stalker Con hosted an event in Orlando which rounded up several key cast members from AMC’s The Walking Dead to raise funds for the victims of June’s Pulse Nightclub shooting in the Florida city.

“In less than eight hours, we raised almost a quarter of a million dollars for the One Orlando Fund,” says James Frazier, [Stephen] Amell’s partner at Heroes & Villains and the man behind Walker Stalker, in a statement to ComicBook.com. “Stephen left set at midnight, on a red eye his own expense, to be in Orlando and assist in raising as much money as possible for victims and their families.”

According to ScreenRant.com >>>
Arrow‘s Stephen Amell recently set up his own talent agency, WFA Entertainment, specifically to help other actors negotiate their convention appearances. As he told The Hollywood Reporter in a detailed report on the current structure of convention appearance fees, it’s well worth an actor taking the time to attend. “If somebody wanted to do a convention every weekend,” Amell explained. “They could make more on the convention circuit than their episodic fee.” 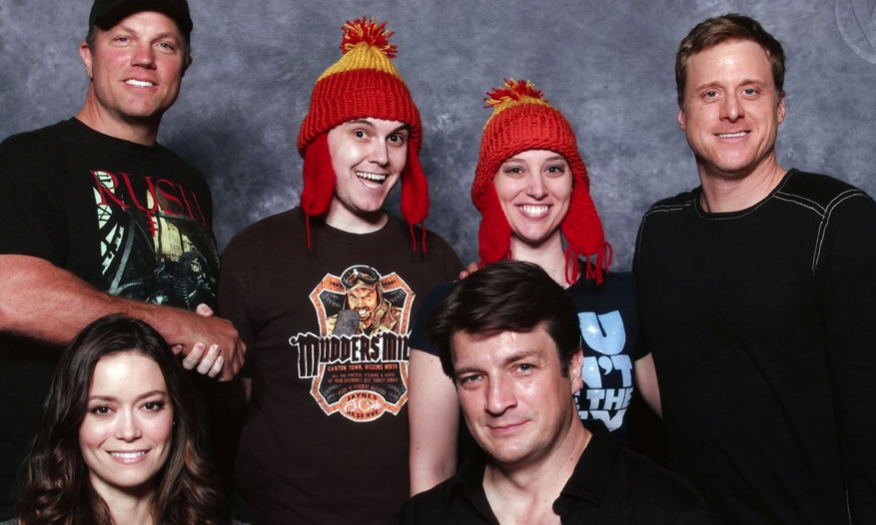 So, here’s the deal…actors are people too, and they need to make a living. I know, I know, this doesn’t resonate too much with the majority of fans, who are making less than $100,000 per year. When actors get paid upwards of $100,000 per episode (or more), and then they rake in somewhere between $50,000 and $250,000 per convention, it sometimes feels like us “little guys” are getting screwed. But you know, no one is forcing us to turn over our paychecks to these guys. Nobody is forcing us to pay between $50 and $100 for an autographed photo. But C’MON! A hundred bucks for a photo? On the flip side, though — these articles make it very clear that these high prices make it possible for fan conventions to keep high-profile actors showing up. In other words, ya gotta PAY to PLAY.

At San Diego Comic-Con this year, I was ECSTATIC to get a signed photo of Richard Hatch for about 40 bucks. But then when my buddy tried to snag a photo of me with Richard, he piped in with, “Well, I usually charge for that.” WHAT? I just laid down $40 for a photo, and you want to charge me for my own iPhone photo? He let me take the photo without paying — because, honestly, Richard is a pretty cool dude. But let’s face facts: he’s not scoring big roles these days, and his convention appearances are a significant source of income for him. I get it.

How much is too much? When do the prices become “stupid money grabs”? Wizard World, Informa, and ReedPop are the biggest companies out there right now generating big profits from star signings. But with the proliferation (and eventual contraction, due to the sheer over-abundance of events) of fan conventions, how long can this last? Is the FAN CONVENTION a passing fad of this past decade, or is it a long-term trend that will generate side revenue for actors for years and years to come? Who knows? If the fans think it’s a fair price, then it will continue. And as has been said over and over again, no one’s “twisting your arm” to get these autographs. (But it is REALLY cool when it happens!). We just hope our favorite actors continue to show up for years to come. 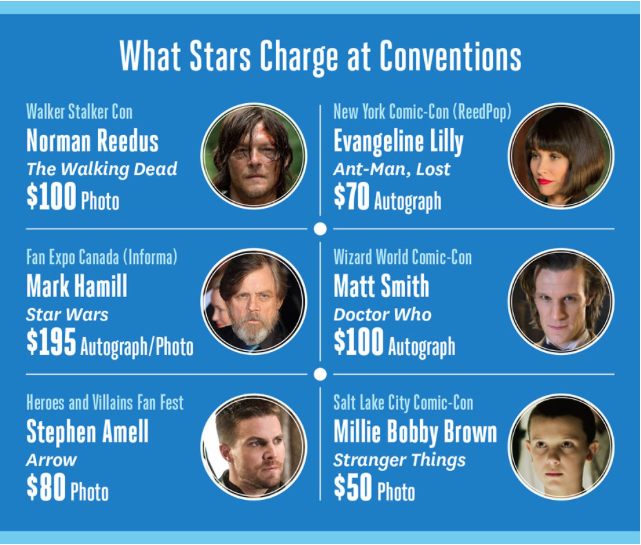