Richard Hatch, the soul of Apollo, Tom Zarek, and fearless crusader for Prelude To Axanar, a fan-made Star Trek film, has passed on to the heavens. FRAK! 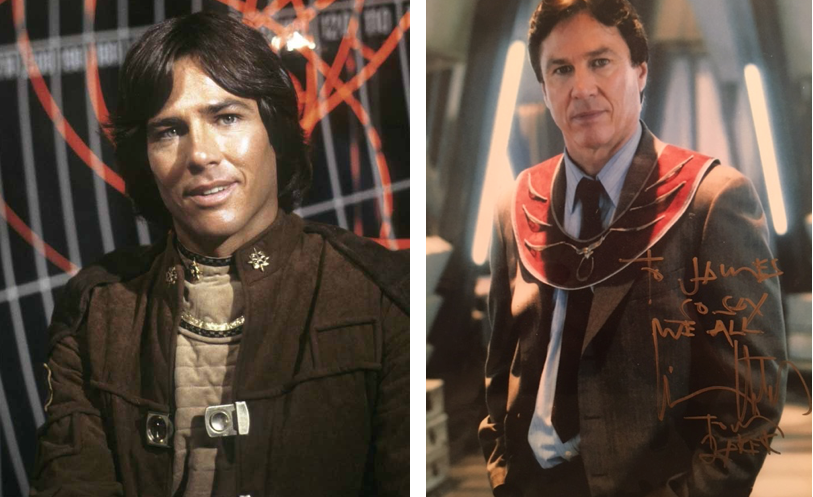 Richard Hatch as Apollo (left), and my autographed photo of him as Tom Zarek from the new series. He signed it ‘So say we all!’

Just like many of you, this one is personal for me…. 2016 may have been a killer, but 2017 ain’t getting off on the right foot either. The original 1978 Battlestar Galactica was a game-changer for my young, TV-obsessed self. Starbuck and Apollo kicked galactic butt each week… and then in the 2000s, Richard Hatch again stepped into the Battlestar mythos, but this time as Tom Zarek — in what many believe to be the high-water standard of SciFi on TV (on on film!). I get chills just thinking about Starbuck’s “Ain’t nothing but the rain,” or Admiral Adama’s “So say we all!”

Richard Hatch’s annual Battlestar pep rally kicked off every San Diego Comic-Con in the best possible way — with excitement, special surprises, and sooooo much fan love. This year, we picked his Thursday morning panel as one of the BEST panels of the convention, and definitely the best way to kick off your Comic-Con weekend. We all loved Richard Hatch because Richard Hatch loved all of us.

Richard, Godspeed — may the angel Starbuck guide you to eternal rest.

From Bleeding Cool: Golden Globe nominated actor Richard Hatch, whose career spanned nearly a half-century, today passed into eternity while surrounded by family and friends after an extended illness. Best known as Captain Apollo in the 1978 original Battlestar Galactica, and then as Tom Zarek in the 2003 re-imagined version, His career started with a stint on All My Children in 1971 as Philip Brent, and put in appearances on series ranging from Hawaii Five-O to The Streets of San Francisco to Baywatch. In more recent years Richard has been featured in a range of independent productions. Full article here >>>

I share tragic news with a heavy heart. Richard Hatch is no longer with us. Goodbye Tom Zarek / Apollo #SoSayWeAll https://t.co/wmisRxVixe

Lately, Richard had been starring in and “fighting for” (literally) Prelude To Axanar, a Star Trek “fan” film that caught the attention of Star Trek rights-owner Paramount, resulting in a nasty court fight.

From The Hollywood Reporter: Hatch had been battling stage 4 pancreatic cancer, Alec Peters, the writer/producer behind the Star Trek fan film Axanar, wrote on Facebook. Hatch had acted in and was a supporter of the project, playing a Klingong in Prelude to Axanar. “Richard was in good spirits when I visited him 2 weeks ago. He knew his time was short, but was comforted by the fact that his son would be taken care of,” wrote Peters. This year I was fortunate enough to find him at the autograph tables, and I gladly paid the $30 for an autograph and photo with him. But the best part was a brief conversation where I could hear his love–his extreme passion–for acting, for Axanar, but mostly for Battlestar. It had become his touchstone, the professional crowning achievement of an exceptionally well-lived life. Full article here >>>

Thom Parham, a frequent guest host on THE CON GUY SHOW (please subscribe — you’ll be glad you did!), was a frequent moderator of Battlestar Galactica panels at Dragon*Con in Atlanta. Here, he’s pictured with the cast at one of his most recent events. 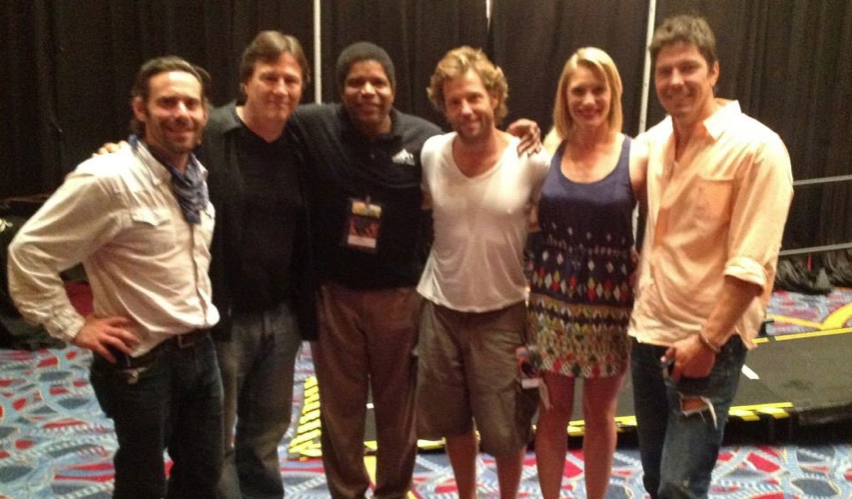 Thom Parham with the cast of Battlestar Galactica during a panel at DragonCon.

Thom had this to say: “Saddened to learn of Richard Hatch’s passing. I moderated numerous Dragon*Con BSG panels over the years that Richard participated on and shared return flights from FedCon in Germany with him seven years ago. He will be missed. ‘So say we all!'”

I've told the story how Richard once defended me before a hostile crowd – still remains one of the most selfless acts I've ever witnessed.

Richard Hatch was a good man, a gracious man, and a consummate professional. His passing is a heavy blow to the entire BSG family.

.Richard Hatch you made our universe a better place We love you for it. Rest In Peace my friend @SoSayWeAll the Admiral!

We are so sad to hear about the passing of #BattlestarGalactica's original Captain Apollo, Richard Hatch. RIP, so say we all. pic.twitter.com/5xpv9Ry8P8

Richard Hatch. A fantastic actor, a passionate teacher of the craft. A mutual friend who is missed.#RichardHatch #RIP #BattlestarGalactica pic.twitter.com/LRzGbkAxAX

Goodbye my friend. See you on the other side. Fuck this hurts. #SoSayWeAll pic.twitter.com/c3nFy0zs4f

So sorry to hear the news of Battlestar's Richard Hatch. A terrible loss.