Last weekend’s very first Los Angeles WonderCon might have been the one and only time the convention puts down stakes in the City of Angeles–for good or ill. A lot went right, and a lot went “not quite so right.” Overall, last weekend’s WonderCon delivered on a lot of fronts: great programming (if you could get in), a HUGE Microsoft Theater for the larger events, and LA Live is pretty cool for dinner at night. That said, the LA WonderCon taught us 6 MAIN THINGS. Check them out in the article below, or right here in our Con Guy WonderCon Show.

For a quick summary of the 6 Things WonderCon Los Angeles Taught Us, read below.

RFID BADGES ARE HERE TO STAY. To help prevent scalping and counterfeit badges, for the first time ever WonderCon had badges with RFID (Radio Frequency Identification) tags. Attendees had to tap-in and tap-out around the convention center. Seems simple enough, and for the most part it went off without a hitch. During the talkback session at the end of the convention, Comic-Con International president John Rogers said the badges are an attempt to cut down on duplicating badges AND they want to stop the practice of multiple people getting into the convention on the same badge. According to Rogers, “Badge Cheaters” (let’s call it what it is) are one reason that so many of the panels are filled to capacity, thus preventing guests from getting into the panels they want. THE BAD: Okay, so RFID’s are here to stay, and for the most part they weren’t that bad. BUT (and this is one huge BUT), many folks had huge problems getting their badge to work properly. For example, lots of people rushed to their panels, only to be told that their badge didn’t work. When this happened, they had to go all the way back to the help desk (in another section of the convention center WAAAAAY far way) to get it fixed. What a waste of time! And on check-in day, our registration line took nearly 2 hours because of technical difficulties with the badges. (although the general admission line seemed to go much more smoothly). Because of the delay, I missed one of the panels I was trying to get into. And the next one too!

MORE INFO: For a full and complete wrap-up of the RFID badge situation, check out an article by our friends over at the SDCC Unofficial Blog. READ HERE>>>

PARKING IN L.A. WAS A CHALLENGE. Okay, okay, if you followed OUR SUGGESTIONS prior to the convention, parking probably would not have been such a big deal. Our CON GUY SHOW co-host Emma Fyffe had absolutely no problems at all. FRYE GUY, though, almost jumped off a cliff on Saturday because of the frustration dealing with parking in downtown L.A. Friday was no problem….we parked in the Convention Center garage, easy. Saturday, though had me circling for hours trying to find parking for less than $30 since the Convention Center garages (and overflows) were all filled up. And traffic was not moving. Eventually, I ended up parking in a sketchy-looking garage, down a dark alley, several blocks away. It all worked out. I’m just glad my tires were still on the car when I got back. What’s the lesson learned? Always FOLLOW PARKING ADVICE from Emma.

HAVE CASH FOR DEALS ON THE FLOOR. @ConGuyLuke tells us he found lots of deals on the convention floor — if you had cash! Granted, most vendors will gladly take your credit card, but when it comes to bargain hunting, be prepared to pull out some good, ole-fashioned dollar bills. Why? Because this helps the vendors avoid credit charges for transactions done with a credit card. And let’s face it — cash talks. This was especially true on bargain-basement Sunday, when most vendors are trying to unload their merchandise ASAP so they don’t have to lug it home. AND, it’s just easier.

TOO MANY PANELS WERE TOO BIG FOR THEIR ROOMS. Apparently, over 1,000 people couldn’t get into the Agents of SHIELD panel. Why the heck was it not in a larger room? Same thing for Bob’s Burgers. And the screening and Q&A for the new AMC Preacher series was packed to the gills with lots of unhappy guests left outside. Officially, Comic-con says it’s just a matter of scheduling with each studio/content owner. But we think this may have to do with the fact that there are fewer mid-level large rooms at the LA convention center. The Microsoft Theater seated over 7,000 but all the rest of the rooms topped out at 1,000 attendees or less. And as we all know, when you put the full cast of Agents of SHIELD in a room, there’s no way 1,000 seats will be enough.

GROUP COSPLAY IS HUGE! It’s been growing for a while now, but this year’s WonderCon was the exclamation point! We saw all kinds of great group cosplay: Ghostbusters; the Zoolander guys (Mugatu, Derek and Hansel); Jurassic World; Lego Marvel superheroes; all the spidermen together; gangs of pirates; the cast of Guardians of the Galaxy. 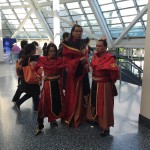 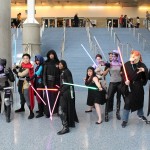 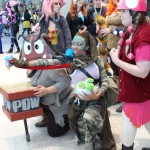 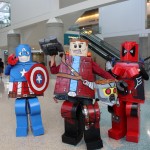 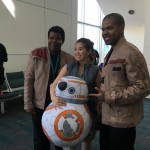 One reason is was so pronounced is that WonderCon is known as one of the better “cosplay cons.” Why? We hear that the lighter crowds allow for more elaborate displays. In other words, you’re not as cramped as you’d be in San Diego or New York. Plus, the close proximity to Hollywood makeup artists and costumers seems to bring out the best of the best. For the full experience, see our galleries:
Best-of-the-Best Cosplay from WonderCon
Cheeseman’s Supernatural Cosplay Adventure
@ConGuyDerek’s Shares the Best Cosplay from WonderCon

AND THE NUMBER 6 thing we learned from the 2016 WonderCon in Los Angeles? WE LOVE WONDERCON ANAHEIM! Don’t get me wrong — LA ain’t that bad. Heck, I drive to downtown LA all the time. But the Los Angeles Convention Center just doesn’t seem like the right fit for a Comic-Con International-type event. Sure, Stan Lee’s Comikaze sets up shop here every fall — and it’s a great event EVERY fall. But it’s also a different convention, as discussed by Emme Fyffe in our CON GUY SHOW. The heavy programming schedule of WonderCon and San Diego Comic-Con do not lend themselves well to convention centers with limited meeting space. And the parking is a challenge. The Microsoft Theater is across the street. The two halves of the LA Convention center are not convenient to each other. John Rogers and his team programmed a GREAT show this year. But returning to Anaheim is the best news to come out of this year’s event….they even promoted it on the back inside over of the program this year. And one more thing: Next year, it’s not on Easter weekend. Which is awesome.

One thought on “6 THINGS THAT WONDERCON LOS ANGELES TAUGHT US”