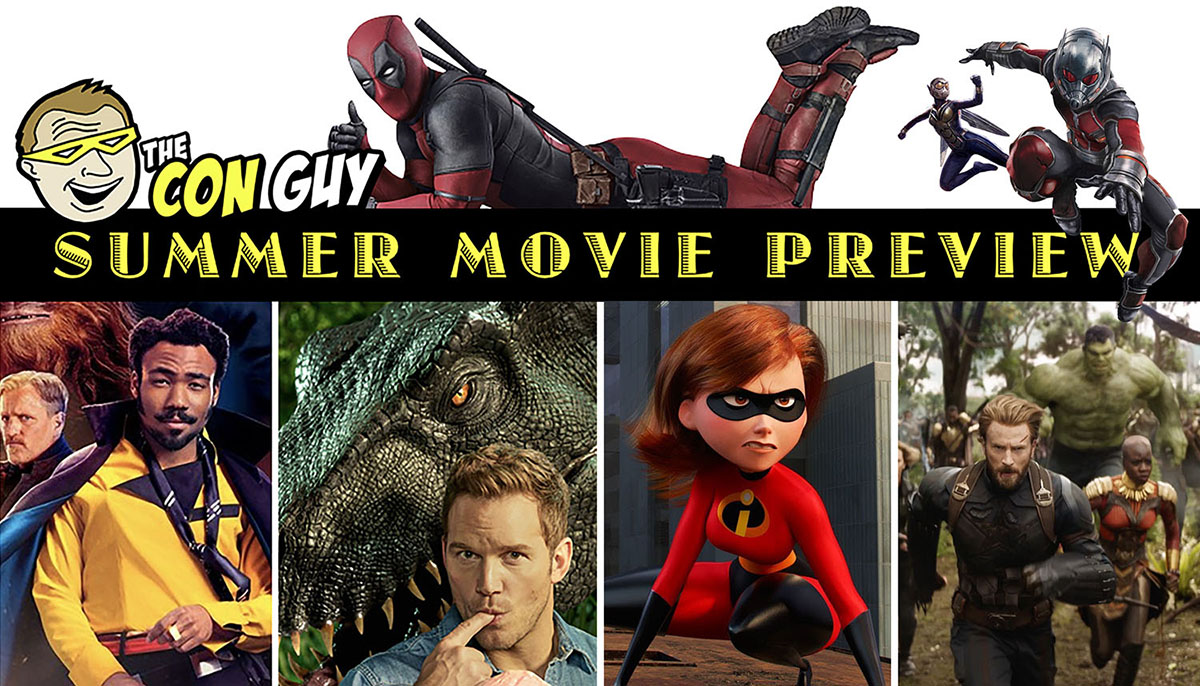 Summer solstice be darned…. we set our seasons by the movie calendar! And this year, that begins a bit early–April 27 (or, more accurately, the night of April 26) with the biggest summer movie in years: Marvel’s Avengers: Infinity War. With more Super Heroes stuffed into its two-and-a-half hours than we know what to do with, this epic team-up is kicking off a giant-sized summer. First, check out our SUMMER 2018 SPECIAL Con Guy show…we discuss all these films (and more!) in detail. Each person has an opinion, and they’re rarely boring…. check us out!

After you check out the Show, then dive into this list below. We slap together our list of the movies we’re stoked about, and they’re not just all covered in capes and spandex. Some have prehistoric scales! And some…. some are just plain silly. It’s summer, so we’re entitled to be silly. To be over-the-top. To be anything we want–except boring. We’ll leave those films for the fall–and for all the pretentious navel-gazers who like to think that summer films are for the unwashed masses (us). Well…. who cares? Let ’em have their “important” films…. we’ll take the fun ones! So, without further adieu, here’s our list of 2018 summer films we’re excited about.

This movie doesn’t really need our endorsement, but we’re giving it anyway, because it is the event that is sending seismic shakes throughout the world right now. Avenger: Infinity War has moved the summer a whole weekend sooner, and no no seems to mind. It’s quite possibly the biggest movie EVER, in both scope and A-list talent. It’s been certified fresh on Rotten Tomatoes, and most reviewers are completely wowed by the spectacle. It may be long, but it’s a whole lot of a good thing. As Thanos says, Destiny Arrives… this is an impressive way for Marvel Studios to celebrate 10 years. It’s the studio that has, quite frankly, changed blockbusters. All those years ago when Samuel L. Jackson, as Agent Fury, told Tony Stark about the Avengers Initiative, an entire shared universe of movies was born, and we’ve been hooked ever since.

Dean Devlin’s latest film is a bit smaller in scope than some of his previous outings (Independence Day, The Day After Tomorrow), but result is just as impressive. David Tenet makes for one masterfully devious bad guy in this story about valet drivers who rob houses, only to discover a bound-and-gagged woman being held captive at Tenet’s house. If they report it, they could go to jail for burglary, but if they don’t help then the woman could die. Dilemmas, dilemmas. We loved this film! It isn’t a big studio production — Devlin is basically bankrolling it independently through Electric Entertainment and distributing with help from Legion M, the fan-owned production company. Devlin and his creative team have been making the rounds at conventions, and the buzz is building.

We are SO ready for this one! The Merc with a Mouth is back, this time with a bigger budget but the same sass as before (budget is double the first one). If advance ticket sales are any indication, this should blow right past the huge $783 million worldwide haul of the first one. It is Fandango’s biggest R-rated pre-sale ever, not to mention the biggest 24-hour pre-sale for Regal Cinemas ever. Ryan Reynolds returns as the funniest super hero around. And even though this one hails from Fox Studios (soon to be Disney), it still shows the dominance right now in popular culture of the Marvel brand. If ever there was a year for super-hero fatigue, it would be this year, but right now there’s no sign of that happening.

Star Wars. That should be all we need to say, right? Except it’s not, because Solo has endured a slew of bad press. It started with the firing of the original co-directors of Phil Lord and Chris Miller (some of our favorites!), to rumors of discord on the set, an angry Lawrence Kasdan (writer), and alleged bad acting from lead actor Alden Ehrenreich. A recent Esquire Magazine said this about Ehrenreich: “He also insists that the story about Lucasfilm forcing Lord and Miller to bring in an acting coach—later identified as writer- director Maggie Kiley—to work on his performance has been mischaracterized: ‘She was part of conversations that happened for a couple weeks at one point,’ Ehrenreich says, ‘but that was basically it.’ (Lord and Miller say that Kiley is someone they’d worked with on previous films and that they brought her on Solo as a resource for the entire cast as well as themselves.) As for the various stories about the Solo crew breaking into spontaneous applause upon hearing of Howard’s appointment or (depending on which account you read) Lord and Miller’s firing? ‘That’s bullshit,’ Ehrenreich says. ‘For a crew to do that would mean they hated [Lord and Miller], which was not by any stretch the case.’ Full Esquire article here.

But despite all of that, we gotta say — we’re still excited for this film. It’s Han. It’s Chewie. And it’s Lando. That’s a whole lot of swagger.

This year is the 200th anniversary of the book Frankenstein, so a movie about the author Mary Shelley makes sense.

is it a Max Max ripoff? Yup. Will we see it? Yup. James Franco as a deranged post-apocalyptic drifter is right up our alley. Well, it’s a least up the alley behind my house, but it still looks nutty fun.

Yes, this movie stars “that guy who looks like a skinny Tom Hardy.” (Logan Marshall-Green). And although there’s not been a lot of press about this film, it looks like it might just be a breakout sleeper hit. Bloody. Violent. And over-the-top nuts. Love it.

Hereditary has been described as the scariest film ever at Sundance. That’s enough for us. We’re in. (Plus Toni Collette — yes!).

It might not be Vegas, but it still looks smooth, cool, and hip. Sandra Bullock plays Danny Ocean’s (played by George Clooney) sister in this girl-power flick about stealing jewels at the Met Gala in New York City.

This MIGHT just be the best super-hero flick of the summer. But don’t call them super-heroes. They’re “supers.” The legal teams will make sure to keep us in line on that one. Brad Bird’s first Incredibles is easily one of the best Pixar films ever, and 15 years later it still hasn’t lost its zing. Here’s hoping part 2 is just as super.

It looks like a cross between “The Hangover” and “The Sandlot.” Of course, those two films (two of my favorites) are pretty similar… all about guys behaving badly as they try to have fun. Tag is definitely on my “must-see” list. Why? Because “Hangover 3” stunk and I need something to fill that void.

In Jurassic World, Michael Crichton and Stephen Spielberg brought their dinosaurs roaring back in grand fashion. The film opened to record numbers and went on to become one of the biggest films of all time. It also cemented Chris Pratt as the biggest new star in the world (it was the third of Pratt’s big franchise successes, including The Lego Movie, Guardians of the Galaxy, and Jurassic World). This time around, Pretty and Bryce Dallas Howard are back, but in a much darker film. The last half of this sequel has been described as almost a thriller/horror movie. Which makes sense considering that the director, J.A. Bayona, cut his teeth on creepy fare such as The Orphanage, Penny Dreadful, and A Monster Calls. This should be interesting.

Another year, another Purge. Seems like all the hooligans should be dead by now, right? Maybe, which is why we’re going back to the beginning with a prequel.

This may not have the same giant awareness as Infinity War, but Paul Rudd and Evangeline Lilly have my vote as the funniest pairing in a Super Hero film since the original Christopher Reeve Superman and Morgot Kidder Louis Lane. I love these two and I can’t wait to see this film.

Die Hard Part 5? No, it’s Skyscraper, with Dwayne Johnson doing what he does best: big-budge action movies with lots of witty one-liners. Expect sky-high box-office on this one.

James Bond Part 25? No, it’s Mission Impossible — Fallout, with Tom Cruise doing what he does best: big-budge action movies with lots of witty one-liners. Expect sky-high box-office on this one. (Deja vu anyone?)

Jaws on steroids. And Jason Stathom. Just when we thought it was safe to make shark movies again.