Oooooh, what a time we had trying to get collectibles. And although Funko had some awesome things up for grabs (we love their stuff!), the impenetrable chaos surrounding their booth on the floor was–quite frankly–a mess.

While not a huge collectibles aficionado, one of our Con Guys had a goal for this particular Comic-Con: get the Funko JAWS figurine—the one with blood on the shark’s mouth and featuring the Quint ‘farewell’ scene. It had Quint wearing his bandana. Small details, but important details nonetheless. So without a lot of pre-preparation, we ventured onto the floor seeking this particular collectible.

And we saw it! But, as was the case THE ENTIRE WEEKEND, we couldn’t get to it. Nope. There it was, just three feet out of reach. Funko’s line and ticket procedure was a complete “Funko-up” the whole time. There were hundreds in the line around noon, the brave collectible-seekers who lined up at 6 a.m. So Funko closed the line. We asked when to return. Funko folks said 3 p.m. We returned at 2:30 p.m., and the line was already closed. When we asked Funko what happened, all they said was, “Line’s closed now. We opened at 1 p.m.”

The next day, we managed to get a ticket to get in line at the Funko booth. SCORE! But once we showed up, the line was already closed….and apparently some new procedures were in place. It all had to do with folks gaming the system and—basically—screwing the rest of us over.

According to the SDCCblog: “According to Funko’s Marketing Coodinator Cameron Deuel, once the convention kicked off, Funko was ‘noticing a disturbing amount of people lingering around [their] booth before the floor was even open,’ which likely meant that exhibitors were swapping badges with regular attendees and hanging around the booth, an unfortunately common occurrence at Comic-Con. This led to frustrating situations for fans who had been lined up for hours, as that combined with the already mad-dash to the booth made it one of the most frustrating lines of the convention.”

We never got that JAWS figurine. We’re now searching eBay and Toys R’ Us. But we’ll get it. We just wish the Funko experience had been better. I mean, the Lego line was long too, but extremely well-organized (tickets upstairs in the Sails Pavilion).

San Diego Comic-Con is the king of exclusive collectibles….both online and on the floor. (although, as we’ve complained before, if you can just get it online, is it really an exclusive???). We picked up an item here or there, but we’re definitely beginners when it comes to getting those exclusives. Below, we feature a roundup of articles and websites that spent considerable time and energy seeking out those exclusives. One day that will be us. But unti then…..we’ll be searching for that JAWS figurine.

UPDATE! WE GOT IT! Read out update article here. 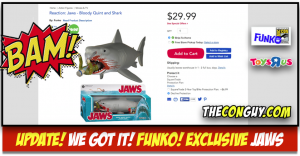 SHOCK TILL YOU DROP

One thought on “WHAT A CLUSTER-FUNKO! EXCLUSIVE COLLECTIBLES WRAP-UP”