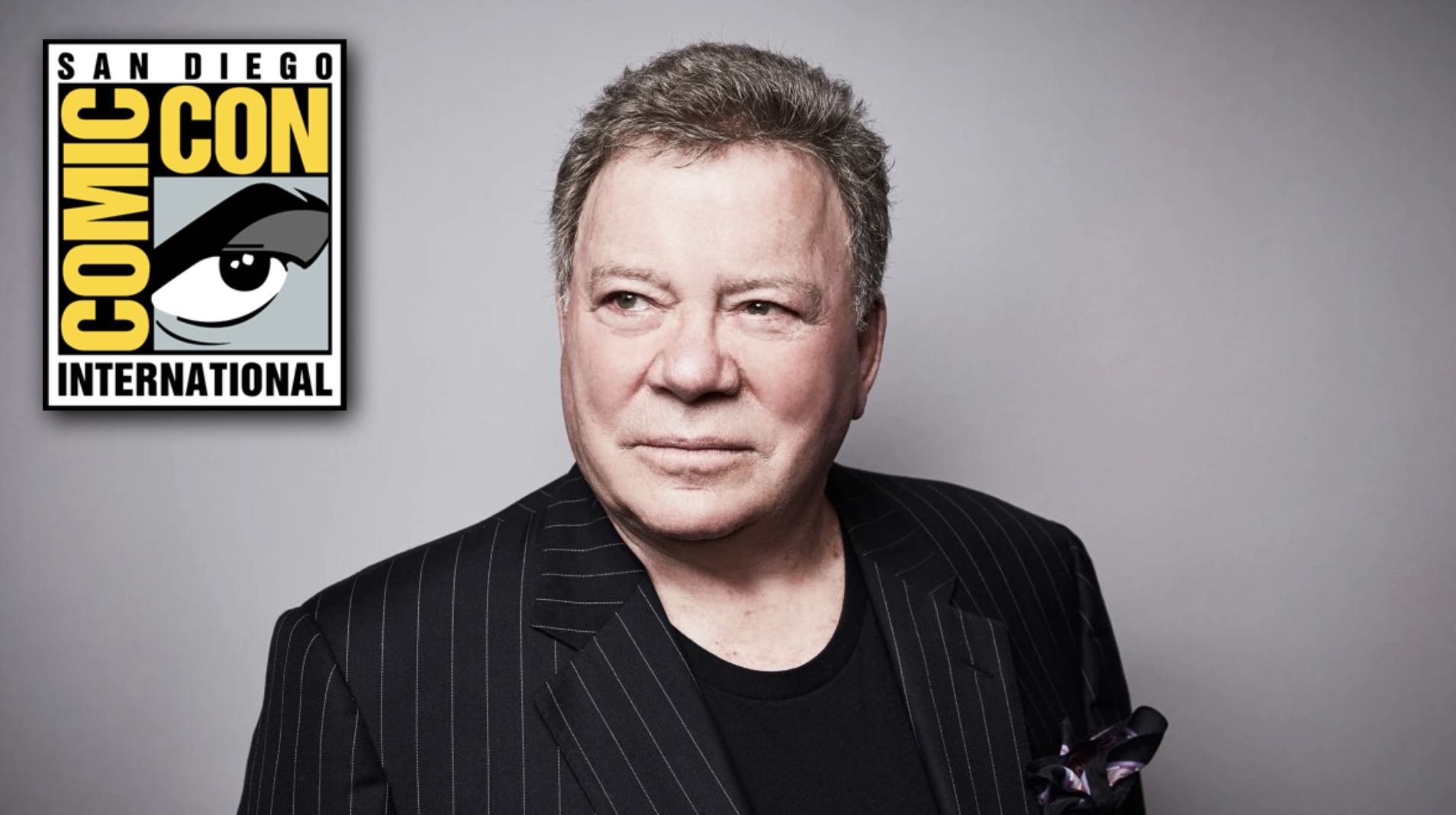 Kevin and Bill will be joined by Philippe and producers from Legion M (Jay and Silent Bob Reboot, Mandy) and Exhibit A Pictures (The People vs George Lucas, 78/52: Hitchcock’s Shower Scene) and will end the panel with what promises to be unforgettable Q&A with the audience.
.

Join Legion M to celebrate William Shatner and immortalize an icon with a handprint ceremony in the lobby of Theatre Box San Diego, plus exclusive autograph sessions and an intimate evening rooftop afterparty (tickets for each event sold separately).

SIMON PEGG IS NANDOR FODOR, PARANORMAL INVESTIGATOR
Friday, July 22 | 5:15 – 6:15pm | Ballroom 20
In 1935, Hungarian-American para-psychologist Nandor Fodor began his investigation of a strange occurrence on the Isle of Man. An average British family, the Irvings, claimed to be haunted by a mysterious entity at their farm. Was it a demon? A ghost? No. It was a talking mongoose name ‘Gef.’ Join stars Christopher Lloyd (Back to the Future), Ruth Connell (Supernatural) – with special video messages from stars Simon Pegg (Mission Impossible) and Minnie Driver (Good Will Hunting), as Adam Sigal (Chariot) director of the upcoming dark comedy, associate producer Clare King (Legion M) and members from the film’s creative team discuss how this wildly original story based on true and very strange events made its curious path to the screen and how fans can get involved. Moderated by Executive Producer David Baxter (Legion M).

.
LEGION M: HOW FANS ARE DISRUPTING HOLLYWOOD BY EQUITY CROWDFUNDING
Saturday, July 23 | 4:15 – 5:15pm | Room 6DE
Legion M is the world’s first fan-owned entertainment company. Through equity crowdfunding, they’ve made it possible for anyone to become an entertainment investor. Get an up-close look at how Legion M has brought to the big screen films like Kevin Smith’s Jay and Silent Bob: Reboot and Nicholas Cage’sMandy – and how you can be involved, too. Join Legion M executives Jeff Annison, Terri Lubaroff and David Baxter as they discuss their latest projects: Halloween thriller The Man in the White Van with director Warren Skeels (Siesta Key) with special video messages from stars Sean Astin (Goonies, The Lord of the Rings), Madison Wolfe (The Conjuring 2), and Brec Bassinger (Stargirl) along with producer Anne Marie Gillen (Fried Green Tomatoes) and Defiant: The Robert Smalls Story with producer Marvin ‘Krondon’ Jones (Black Lightning).

DARKNIGHTS AND DAYDREAMS: FROM BATMAN TO BROADWAY
Saturday, July 23 | 6:45 – 7:45pm | Room 6DE
How far would you go to make your dreams come true? Devastated by how Batman was portrayed as a campy joke in the 1960s television series, teenager Michael Uslan vowed to show the world the dark and serious vigilante envisioned by Bill Finger and Bob Kane. He didn’t stop until he’s acquired the film rights to the character and began an impressive four decades producing Batman on film – starting with Michael Keaton’s Batman in 1989. Now Michael’s story is on its way to Broadway! Join Batman Franchise producerMichael Uslan, Broadway producer Don Franzt(Beauty and the Beast) and Legion M’s VP DevelopmentDavid Baxter for a lively discussion of the journey of adapting Uslan’s inspirational memoir The Boy Who Loved Batman for the Broadway stage … along with a fabulous Batman Q&A and special video messages from director Lonny Price (Sunset Boulevard), screenwriter Alan Zweibel (Curb Your Enthusiasm), and producer Robert Nederlander Jr. (CEO Nederlander Entertainment) Moderated by publicist Gary Miereanu.

Legion M is the first entertainment company designed to be OWNED BY FANS. With a rapidly growing community of over 150,000 people (including over 35,000 investors who own a stake in the company), Legion M has raised over $16,000,000 to help finance, produce, develop, release, and monetize film and TV projects including upcoming feature films The Man In The White Van (Sean Astin, Ali Larter, Brec Bassinger, Madison Wolfe), Nandor Fodor and the Talking Mongoose (Simon Pegg, Minnie Driver), and Mary’s Monster (directed by Farren Blackburn and produced by Fulwell 73 and Rose Ganguzza).  Working with partners that include NEON, Searchlight, Bleecker Street, SpectreVision, Saban, RLJ, and Screen Media, Legion M has been involved with many notable releases including Colossal (Anne Hathaway, Jason Sudeikis), Mandy (Nicolas Cage, Andrea Rosborough), and the Jay and Silent Bob Reboot (Kevin Smith).

Led by two Emmy award-winning serial entrepreneurs, Legion M is backed by an advisory board of Hollywood heavyweights including William Shatner, Dean Devlin, Bill Duke, Leonard Maltin, Eric Ries and senior executives from the studios and streamers. To learn more about investing in Legion M and/or to become a member of the Legion for free, visit www.legionm.com.