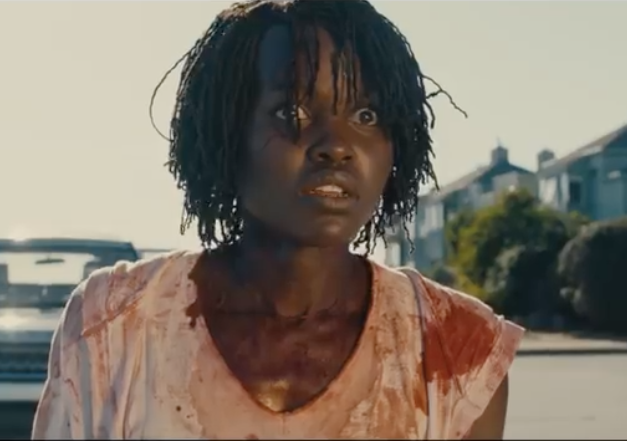 Jordan Peele blazed into the hallowed horror film halls with his socially relevant creep-fest GET OUT. It got a whole slew of awards nominations, including best pic, and now Peele is prepping a brand-new thriller called US. Check out the trailer below.

From DEADLINE: “It opens with the Wilson family, Adelaide (Lupita Nyong’o) Gabe (Winston Duke) and their children, traveling up the Northern California coast to Adelaide’s childhood beachside home… We next see the family on the beach, chatting it up with the Tylers (Elisabeth Moss and Tim Heidecker) when Adelaide notices her young son has wandered off. She finds him staring at a statue-like man standing alone on the beach. (Hint that terrifying things are about to happen). Cut to later that night when Gabe finds four people holding hands and dressed in red, staring at the house and standing silently at the bottom of their driveway…The shadowy figures suddenly invade the Wilsons’ home, trapping them inside.”

Can we just talk about how amazing this sound track is about to be pic.twitter.com/Z1FLlA4gCA

I'm wondering if close up shots of people crying, while frozen in abject horror will be @JordanPeele's cinematic signature.#UsMovie #WatchYourself pic.twitter.com/4XhGGbJk8l