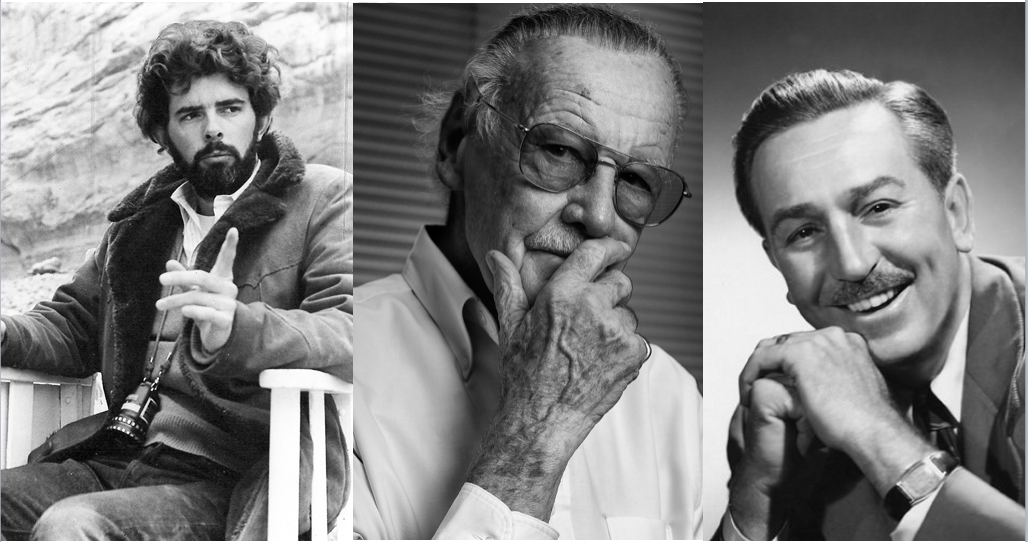 Okay, that might sound a bit dramatic. And it is. But for me—a young kid from a small neighborhood in the Midwest, surrounded on all four sides by miles of farmland—these three men represented my biggest passions, my wildest daydreams, and my most fervent aspirations. I am who I am today because of my lifelong obsession with them—and the enduring worlds they created. And I’m sure I’m not alone. These three men created generations of filmgoers, comics-readers, and magic-lovers who can’t imagine a world without them. In their own way, these guys saved the world. So on the sad occasion of the death of Stan Lee, it felt somewhat appropriate to honor three men that I consider the three greatest creators of the 20th century.

Why them? To be honest, this list could have been longer—when I was young, I was quick to idolize many-a-cool-creator—but these three people represent more than just “creators.” In my never-humble and frequently-questionable opinion, these three men—more than anyone else—created worlds, universes, and entire mythologies that grew, exploded, and became bigger than them, bigger than their creations, and will—ultimately—outlive all of them. If I were younger, perhaps J.K. Rowling would have been included on my list, but for a kid growing up in the 70s and 80s, there was nothing more exciting than Star Wars; nothing more world-changing than Marvel; and nothing more transformative than Disney.

What about Spielberg? Yes, he’s great, and probably the most gifted/visionary director of our generation. But as much as I love his films, I can’t really say that he’s created a world or a universe that I can lose myself in, and that will grow and outlive him. Jaws? Best summer blockbuster of his career, but the franchise kinda died out in the 80s. E.T.? Love that little alien, and I cry every time he says “be good” as he leaves, but again—it’s a single movie, not an entire world. Same with all his films except for maybe the Indiana Jones films—which, if we’re honest, were actually dreamt up by George Lucas (but only Spielberg could have directed them as expertly as he did). So, yes, Spielberg is fantastic talent, but not a world-builder.

And one more thing before the complainers start scolding—yes, I realize there are no women on this list. That in no way is meant to diminish any person. It’s just that honestly, growing up in the cornfields and prairies of Illinois, the influence of George, Stan, and Walt reached me more radically and fully than anything else. Simple as that. I could come up with some diverse names just to satisfy whomever would be offended by the omission. But if I’m naming the people who shaped and created ME, then I gotta be honest—these are the guys. No offense intended, and no insults toward one of your idols. We all got heroes—these are mine!

So, without further ado, let’s celebrate the worlds of these three magnificent maestros of the imagination! 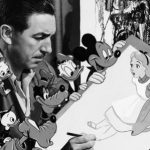 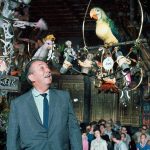 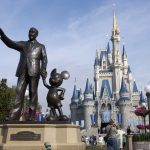 The icon. The legend. The one and only Walt Disney. Starting way back with the Alice Comedies and continuing on up through Jungle Book, this man imagined more fantasies, dreamt more crazy dreams, and created more original content than anyone, alive or gone. But his legacy is more than just films. You could argue that his biggest mark on popular culture is Disneyland, the world’s first theme park. Before Disney, the kiddies could ride rides at the local amusement park while the parents sat on the bench and watched. But Walt dreamt of a place where families could experience it together. And he imagined a place of fantasy, of make-believe, and of Mickey, Minnie and all their friends. Walt created a legacy that has outlived him and has become the single most recognized entertainment brand on the planet. As a kid, I admired the absolute artistry of Disney’s animated features, such as Fantasia, Sleeping Beauty, and Cinderella. And I have to give credit to my mom for helping me fall in love with all things Disney–she took me to my very first movie, Mary Poppins, when I was probably five or six years old. At that young age, I decided I wanted to be an animator and work for Disney. Of course, didn’t we all dream that same dream? And although he died before I was born, the world that Walt left behind is better because of him.

He holds the record for winning the most Academy Awards given to a single person in history (32!). His film Fantasia was (and probably still is) a strange yet beautiful “art house” film way ahead of its time. He led the creation of Snow White, which was the very first feature-length animated film. He pioneered the multi-plane camera, which was the first camera to give multi-layered depth to animation. He changed the face of family outings with Disneyland, and then he changed family vacations forever by dreaming up Walt Disney World—although when he was living, it was referred to as The Florida Project, with Epcot at the middle. It’s hard to quantify what this man did, but it can be summed up with this quote from Walt himself: “It’s kind of fun to do the impossible.” Walt, you’ll forever be our inspiration. 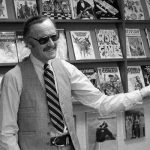 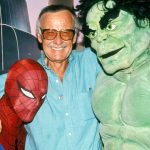 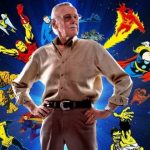 Stan started working at Timely Comics when was in his late teens, and ended up becoming editor-in-chief of what would soon become Marvel Comics. Together, with some of the greatest comic creators, artists, and writers the field has ever known, Stan helped usher in the Golden and the Silver age in comics, creating characters who changed their culture and are still doing it today.

Most people are aware of the films coming out of Marvel Studios. Everything from Iron Man, to Captain America, to Guardians of the Galaxy, to the blockbuster Avengers. Yes, at over $17 billion to date and counting, Marvel Studios is on the longest winning streak in history. Avengers: Infinity War itself made over $2 billion at the global box-office, whereas Black Panther brought in more than $700 in just North America. Stan Lee has cameo’d in all those films, a testament and reminder that he, personally, had a hand in creating all those characters.

According to The Hollywood Reporter, “The decade, from 1961 to 1971, in which Lee was actively writing monthly comics — in addition to being Marvel Comics’ editor in chief and art director — was perhaps the most sustained burst of creative innovation in pop culture history.” I remember as a kid, mowing my aunt’s lawn and taking the money she paid me to go pick up my subscription of comics from the local shop—Spider-Man, Marvel Fanfare, X-Men, and more. My dad’s favorite was always Fantastic Four. And it was cool that dad and I both shared a fondness for comics. He raised me well.

I even started drawing my own comics as a kid, sketching out the panels with pencil. That’s when I decided I wanted to be a comic book artist…. Little did I know at the time, though, that reading (and writing) comics was training me in my eventual career path of writing. As an adult, I was privileged to have had the opportunity to interview the great Stan Lee. His hearing was fading, so I had to repeat many of my questions. But I’ll never forget how gracious he was, how child-like in his endless enthusiasm, and how much he loved that what he did. Oh, and guess who he said his idol was as a kid? Walt Disney. Go figure. Excelsior! 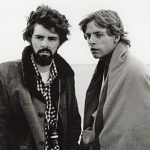 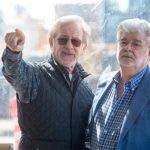 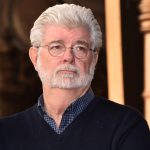 Both Walt Disney and Stan Lee are now passed on, but the third legend on this list is—thank goodness—still with us, although he’s decided to recede from the limelight for the time being. George Lucase created the world of Star Wars, and in so doing created modern Hollywood—and a generation of fans who could never look at movies the same way again.

Star Wars broke the all-time box-office record, upon its release, and remained there until being bumped off by E.T. But no matter, because the story of the Skywalkers quickly became ingrained in our collective psyche, forever establishing itself as modern myth. And it’s not coincidence that Lucas was able to pull this off, because he’d been studying Joseph Campbell’s A Hero With a Thousand Faces, which beautifully illustrates “The Hero’s Journey,” that archetypical story that lives in all cultures, and underlies all epic tales.

Yes, he carved out modern mythology, but more than that, he gave us characters to love, an adventure to live, and the feeling of hope that lasted our entire lives. Yes, Star Wars—at its best—is always about hope (that’s why the end of the Han Solo storyline in The Force Awakens bothered me. And don’t even get me started on Luke in The Last Jedi, but I digress.) And it’s a hope that endures.

Just like Stan Lee, I was able to interview George Lucas. It happened face-to-face, sitting on a couch, with me stumbling over every word, and Lucas as cool as a cucumber. He’s supremely confident, and endlessly creative. His directing prowess may have waned in later years, but his mind and imagination are fertile ground for the most profound, game-changing worlds in entertainment history. George Lucas created the Star Wars universe, and it will outlive him simply because he’s a genius, and he created something that’s alive, expanding, and forever inspiring hope. George—may the force always be with you.

2 thoughts on “Lucas. Lee. Disney. The Three Most Creative World-Builders of the 20th Century”