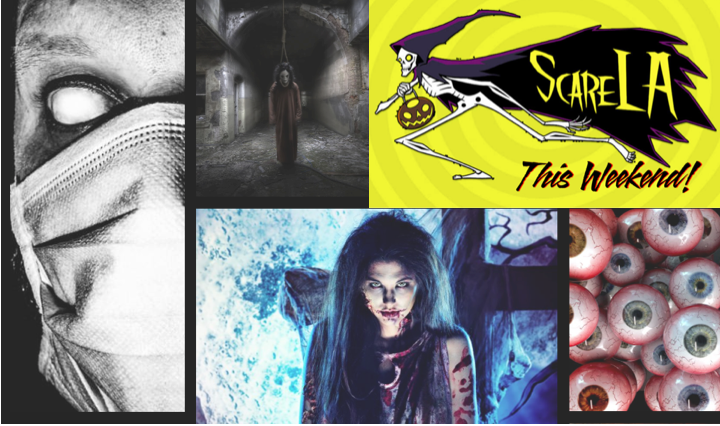 Whatcha doing this weekend? How about head on down to the Los Angeles Convention Center for Scare LA, the original Los Angeles Halloween Convention, chock full of horror films, makeup demonstrations, theme park Halloween panels, and all kinds of spooky mayhem. Here’s EVERYTHING you need to know to make the most out of your weekend at ScareLA.

First up, watch our interview with ScareLA founder and executive director Lora Ivanova. She gives all the behind-the-scenes info you’ll need to know.

WHERE? Conveniently located off the 110, 10 and 101 freeways at 1201 S Figueroa St, Los Angeles, CA 90015. Take the Metro Expo Line for easy access a block away and skip the traffic alltogether.

COSTUMES: Costumes are highly encouraged and multiple costume contests will take place throughout the days of the convention. Rules: Please note that there will be children present, so keep costumes PG-13. Also, we ask that you do not have anything that will drip off your costume (keep your blood on your person at all times!). WEAPONS POLICY While common sense prevails, some basic rules on costumes and props you may be thinking of bringing to ScareLA: All costume weapons must conform to state and federal law. Projectile costume weapons must be rendered inoperable. Any weapon or prop with a real blade must be tied to your costume so it can’t be drawn. ScareLA reserves the right to refuse entry to anyone carrying a weapon or wearing a costume deemed unsafe at our sole discretion.

TICKETS: Tickets are still available for both days, although some premium level tickets are sold out.

OUR PICKS: There’s no way to do or see everything, but here’s a sampling of what we’re super-stoked to see:

11:00 AM – 12:15 PM
Real Horror: Dark Inspiration.
Join an in depth conversation of real life horrors that inspire artists to create the wicked magic they do!

12:30 PM – 1:15 PM
Launching a Career in Horror : Hell’s Kitty & Horrific Beginnings
Many entertainment careers were started in horror. Leonardo DiCaprio (CRITTERS 3),  Angela Bassett (CRITTERS 4), Johnny Depp (A NIGHTMARE ON ELM STREET), Jennifer Aniston (LEPRECHAUN), Jim Carrey (ONCE BITTEN), and directors Stephen Spielberg (JAWS), James Cameron (ALIENS), and Sam Raimi (EVIL DEAD) are just a few who cut their bones through “horrific” beginnings. The success of recent films like GET OUT and THE SHAPE OF WATER  in 2018 means that the popularity of horror is breaking through to more mainstream audiences. Writer/Director Nicholas Tana and Producer Denise Acosta from the comedy horror web-series, comic book, and movie, HELL’S KITTY, will be hosting the panel along with special guests Charles Chiodo (KILLER KLOWNS FROM OUTERSPACE), scream queens, Channel Ryan (CIRCUS OF THE DEAD), and Victoria De Mare (KILLJOY); along with Luke LaBeau, and Joanna Fang for a wonderful, fun-filled panel and Q&A.

1:30 PM – 2:15 PM
From Batman to Beetlejuice : Ve Neill Retrospective
Multiple-time Oscar Winner Ve Neill takes the main stage! Meet the most incredible monster makers in the industry as contestants from several seasons of the wildly popular shows FACE OFF and Skin Wars who come together on the ScareLA stage.

2:30 PM – 3:15 PM
Halloween at the Theme Park : CBS Films/Lionsgate Hell Fest Feature Presentation
Meet the director of the highly anticipated new movie HELL FEST, from CBS Films/Lionsgate, in theaters September 28. A masked serial killer turns a horror themed amusement park into his own personal playground, terrorizing a group of friends while the rest of the patrons believe that it is all part of the show.

3:30 PM – 4:15 PM
From Horror to Haunt : Transitioning from Screen to Immersive Entertainment
Some of horror’s most talented creators inevitably transition their careers from screen screams to live entertainment. Hear how these horror pioneers have made the switch and learn from their scary experiences.

6:15 PM – 7:00 PM
Suspense to Screams: Unique Voices in Immersive Horror
From the intimate and personal to the elaborate and expansive, immersive horror can use many different forms to scare you during an experience. Meet four companies that take varied approaches to this artform, but all succeed in haunting you far after an experience as ended.

11:15 AM – 12:00 PM
Collywobbles Presents : Haunted LA
Learn about the darkest corners of LA’s most haunted locations. Dare to enter? Decide for yourself after you hear all the gory details!

12:15 PM – 1:00 PM
Evil Genius & True Crime
Horror in the real world takes many shapes, sizes and… faces. Meet these true crime producers as they share some of their experiences documenting our world’s darkest personas and events. Not to be missed!

1:15 PM – 2:45 PM
Special Feature : Universal Studios Hollywood, Halloween Horror Night
Join us for a special in-depth look at some of HHN’s most anticipated 2018 mazes as the biggest theme park Halloween attraction in SoCal and beyond, prepares to open doors to thousands of horror fans in LA. John Murdy and Chris Williams, the creative force behind Halloween Horror Nights – Hollywood, return to ScareLA to share behind-the-scenes info on this year’s event.

5:15 PM – 6:00 PM
HAUNTERS: The Art Of The Scare
UPDATE & DEBATE : Since HAUNTERS premiered on NETFLIX it has sparked debates and conversations about how haunted houses for Halloween have spawned a subculture of full contact terror simulations. But how far is too far? Now it’s time to a have a conversation with director Jon Schnitzer, co-creator of BLACKOUT Josh Randall, legendary scare actor Shar Mayer and maze designer Donald Julson.

The theme of this year’s event is “Descent Into Darkness,” and we can’t wait to try out as many of these Haunted Experiences as we can! Here’s most of them — but not all!