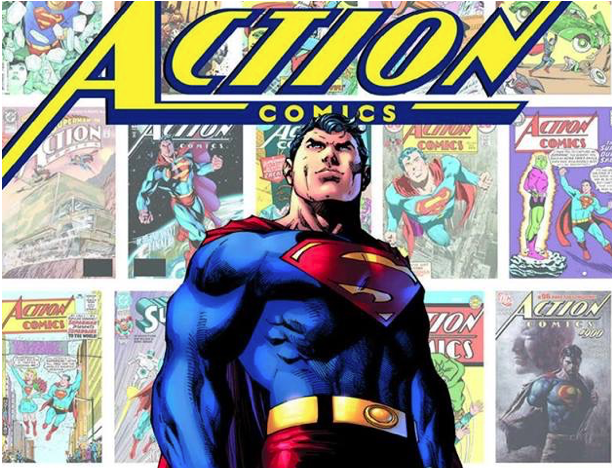 For the First Time in WonderCon History, DC All Access to Live Broadcast Must Watch Publishers’ Panel Celebrating Its Expanding Roster of Talent and Innovative Imprints.

From 80 years of Superman to headline-making publishing initiatives, DC Entertainment will reveal further details regarding its innovative new imprints alongside the industry’s biggest artists and writers, as well as unfold a celebration for the record breaking ACTION COMICS #1000 at WonderCon, taking place in Anaheim on March 23-25.

Pop culture history will be made when the series that launched the superhero genre and introduced Superman to the world, ACTION COMICS, reaches its landmark 1000th issue. From the return of the red trunks to eight decades of hope, optimism and adventure, the DC’S ACTION COMICS 1000: CELEBRATING 80 YEARS OF SUPERMAN panel will not just celebrate the history of the legendary Super Hero, but discuss why Superman is needed now, more than ever before.

Plus, WonderCon will debut the first ever DC All Access live broadcast of the DC PUBLISHERS panel. Live from Anaheim on Saturday, March 24, the special 90-minute panel headlined by Jim Lee and Dan DiDio will feature a trove of surprise guests. Be there as the DC Publishers share their bold editorial vision that promises to expand readership like never before. Fans not attending Wondercon can watch the Livestream on the DC YouTube channel or on the DC Comics Facebook page.

Across the aisle, the Graphitti Designs booth (#1001) will also feature a collection of rare, limited edition silver foil variant issues of DC’s hottest comics featuring covers by Mikel Janin (BATMAN #43), Stanley “Artgerm” Lau (SUPERGIRL #19) and Mitch Gerads (MISTER MIRACLE #7). All comics are priced at $15 each, bagged and boarded and available while supplies last.

From bestselling series to iconic characters, DC’s WonderCon programming features a collection of must attend panels (panelists and panel times are subject to change).

As the longest-running superhero comic series in history reaches its millennial milestone, contributors to the star studded issue of ACTION COMICS #1000 include ACTION COMICS creative team Dan Jurgens and Norm Rapmund, DC Publisher Jim Lee, Jason Fabok (MAN OF STEEL miniseries), Alex Sinclair andMarv Wolfman will join fans in a celebration of eight decades of enduring hope, optimism and adventure from the most iconic Super Hero of all time – Superman. Room: North 200B

10:00-11:30 a.m. DC PUBLISHERS – Streaming live from WonderCon to fans around the country, DC Publishers Jim Lee and Dan DiDio will highlight key initiatives that have made DC the talk of the industry.  The first few months of 2018 alone has produced two new imprints for young adult readers, The Sandman Universe line of comics overseen by Neil Gaiman, DC Black Label imprint, featuring a collection of edgy, provocative graphic novels and comic books, a new editorial team for iconic MADMagazine and more. Some of the biggest names in publishing will take the stage with Jim and Dan to discuss how DC will elevate its iconic Super Heroes to a level never before reached. Room North 156

3:30 – 4:30 p.m. DC UNIVERSE – Featuring action-packed series that have enraptured fans and garnered critical acclaim, join some of the creative minds bringing DC Universe’s world class roster of iconic Super Heroes to life, including Mitch Gerads (MISTER MIRACLE), Julie Benson and Shawna Benson (BATGIRL AND THE BIRDS OF PREY), Liam Sharp (THE BRAVE AND THE BOLD: BATMAN AND WONDER WOMAN), Josh Williamson (JUSTICE LEAGUE: NO JUSTICE, THE FLASH), and more for a compelling dive into the most talked about series in comics. Room: North 200B

1:30-2:30 p.m. MAD – Featuring new faces and all-star contributors, the panel will give a sidesplitting preview of what’s to come in the world of MAD. Executive Editor Bill Morrison will be joined by legendary cartoonists and illustrators Tom Richmond and Sergio Aragones, new contributors Bob Fingerman, Luke McGarry and more for a laugh out loud look at the future of MAD. Room: 213

For a complete list of signings and panels, behind the scenes coverage and in-depth interviews directly from DC’s web series, DC All Access, download the DC All Access mobile app. The app is available for free at the Apple App Store or the Google Play Store.