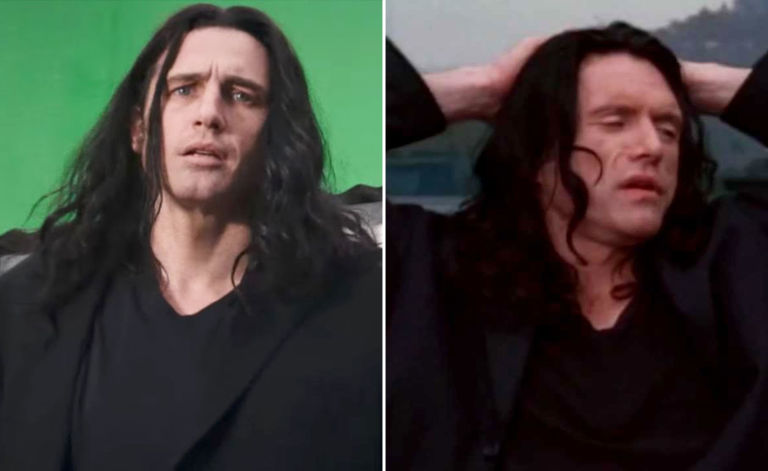 Hurry! Get to the theater, push your way through The Last Jedi crowds, and see The Disaster Artist, James Franco’s latest film. Franco usually does a whole lot of experimental stuff, goofy stuff, and super-wierd stuff, but The Disaster Artist is REALLY, really good. I mean, REALLLLY good. Here, our team discusses the mad genius of both James Franco and Tommy Wiseau. Did we say genius?

How many of you outside of Los Angeles are familiar with THE ROOM, a “disasterpiece” film produced by and starring the mysterious Tommy Wiseau? It’s frequently regarded as the worst film ever made…. the “Citizen Kane of bad movies.” Does that pique your interest?

Somewhere in 2003, Tommy Wiseau’s The Room began a very limited run in theaters in Los Angeles, but was soon relegated to a long-term midnight run in one theater. Drivers were intrigued by a mysterious billboard featuring Tommy’s face. People started showing up at this Rocky Horror for a new generation. To this day, The Room’s midnight shows in LA still draw in fans who throw spoons, shout in unison, and recite their favorite lines from the film. We’ve been. And then we met Tommy at LA Comic Con. We bought the film, his signed football, some shirts, posters, and gotten photos with Tommy. In other words, we’re true fans.

Jim and Cheeseman with Tommy Wiseau at LA Comic Con.

Do you need to have seen THE ROOM before seeing The Disaster Artist? No. But it sure does help. If you’re not familiar with the film (download and watch it! With lots of drinks), no worries, because James Franco has gone out of his way to make sure that you’ll now appreciate the mysterious mastermind behind The Room, Wiseau.

Usually, Wiseau reveals very little about himself. Long having claimed to be from New Orleans (yeah, right), he only recently admitted that he’s originally form Europe. He arrived in Hollywood with a lot more passion than talent, and through a single-minded vision, he created a $5 million “disaster.”

The Disaster Artist combines–for the first time–James Franco with his younger brother Dave. And, as the LA Weekly points out, their partnership is somewhat similar to the same partnership between Wiseau and his close friend Greg Sestero. Sestero played a major part in The Room, and later wrote the book The Disaster Artist, on which the movie is based.

From LA Weekly: “As both director and star of The Disaster Artist, James dissolves himself into Wiseau, an intractable man of unknown origins (New Orleans? Belgium? Transylvania?), whose emotions are pinned firmly to the sleeve of his wrinkled button-up, as he attempts to conquer Hollywood by blazing his own path in by way of a self-financed movie. (“Don’t wait for agent to make it happen,” Wiseau had told me 15 minutes earlier in curiously broken English, as he sat exactly where James is now.)

The Disaster Artist is at once hilarious and full of pathos, a complete and wildly successful meld of both James’ dramatic and comedic ambitions that walks a tightrope of exacting tone. And as I sit facing the Francos in this barren meeting room, I can’t help but see the parallels between them and Wiseau and Sestero. All four of them came to Hollywood from the Bay Area with big ambitions. Dave and Sestero are the calm, guiding forces, who lived with their respective counterparts when they came to L.A. and who had to go off on their own paths for a bit. But Franco and Wiseau are erratic men of spectacle, seemingly living inside their own elaborate art projects of identity.”

You can read the entire LA Weekly article here >>>

Here’s what’s funny–or interesting–or instructive. Franco has latched onto someone who himself was already a cult “hero” of sorts. Now, with the release of The Disaster Artist nationally, an even larger audience will be introduced to Tommy and his zany, bizarre antics. They’ll experience his endlessly quotable bad acting (“Oh hai Mark” and “You’re tearing me apart, Lisa!”).

Who, actually, is Tommy Wisea? How old is he? Where did he come from? But most importantly, IS HE IN ON THE JOKE? Does he know how bad THE ROOM really is? Does he care? Or is he just riding the whole joke all the way to the bank? Is Tommy becoming a new, weird type of Folk Hero. Most folk heroes have something bizarre, outlandish, and weird about them, don’t they? What makes someone a folk hero? What makes people gravitate toward them? Likability? Being an underdog? Fighting the system? Winning against all odds? Well…. that’s Tommy. You should DEFINITELY get to know him.

Here’s the closest thing we could find to a trailer for the film? It’s a “fan-made” endeavor, but probably a whole lot better than what the “official trailer” would be.

Here’s the trailer The Disaster Artist. Savor it. Love it…. and go see this film!