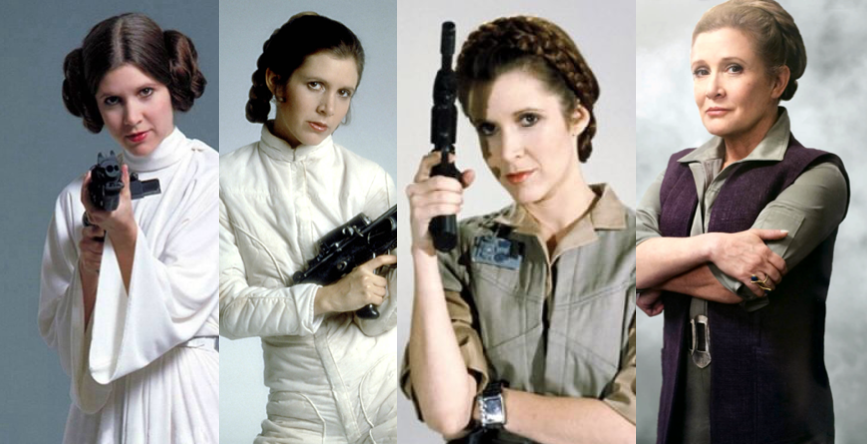 Lucasfilm President Kathleen Kenny told ABC news that Carrie Fisher, who died earlier this year, will not appear in Star Wars Episode IX. This was a surprise to many, especially since Fisher’s brother, Todd Fisher, told the New York Daily News just a few days ago that Carrie–as General Leia Organa–would be in Episode IX. What gives?

According to Variety, “[Todd] said he and Fisher’s daughter Billie Lourd gave Disney permission to use recent footage of her for the next sequel, which is due. “Both of us were like, ‘Yes, how do you take her out of it?’ And the answer is you don’t,” Todd Fisher said April 8. Kennedy said today, “He was probably confused.” Full article here >>>

Confused? We’re not so sure about that. Maybe, just maybe, the public relations tidal wave caught up with them after Todd said what he did. In other words, the outcry from fans who were upset about using Carrie’s footage posthumously in Episode IX might have changed their minds.

I, for one, was very happy that Carrie would be in Episode IX. Call me a nostalgic boob, but the thought of Leia Organa not making it to the end of this galactic journey is just too hard to fathom. It was comforting, in a way, to know that she would survive Episode VIII, The Last Jedi. I mean, after that tragic and unsettling death in The Force Awakens, the idea of losing Leia just sucked. Does that mean she won’t even appear as a Force Ghost? Really?

Here’s what the Hollywood Reporter had to say about it: “There is something about using actors posthumously through CGI that just doesn’t sit right with me… There is just something about it that seems disrespectful to me. … Even if recent, never-used footage of Fisher were cobbled together for Episode IX — as Todd Fisher seemed to be suggesting was the case — there’s still no way that could do the character, or the actress, justice.” Full article here >>>

Okay, I do understand this point of view. I am, and will always be, a Carrie Fisher/Princess Leia super-fan. She’s the ultimate movie heroine. (Heck, what will we ever do without her?). But I’m not sure I’m completely onboard with the logic that it would be “disrespectful.” To borrow an example from another mega-franchise, the death of Paul Walker didn’t cause studios to shelve all the footage they had of the actor. Nope. Instead, they gave his character, Brian, a grand and heart-felt send-off using existing footage and his own brother as a stand-in. So, too, could be the case with Carrie. She’s not just a part of Star Wars… I’d almost argue that she IS Star Wars. She is the heart and soul of the franchise. Why not use pre-existing footage and allow our beloved princess/general to “live happily ever after” at the end of Episode IX?

My fear–and that of many fans–is that this now means that General Leia Organa will now die in The Last Jedi, thereby ensuring that it will forever be known as “the one where Leia dies.” I mean, The Force Awakens already has the distinction of “the one where [spoiler] dies.” (Note to self: How long do we still need to protect that spoiler?)

Am I being selfish. Probably. Is it in “bad taste” to use Carrie Fisher’s unseen footage in the final film of the saga? Maybe. Regardless, the announcement that this will be Carrie’s last film adds a huge amount of bittersweetness to the film. Knowing that Leia will now likely be killed off in this film makes me super-anxious. Maybe, just maybe, they can send her off without killing her. Or maybe she gets to finally join her beloved Han…please please please let her see Luke again. If Luke returns after all these years and gets to see neither Han or Leia, that’s gonna really suck balls.

As a small aside, we gotta ask ourselves: What would Carrie want? Nobody knows, but I’m not so sure she’d be overly offended at the thought of her appearing in Episode IX. She may, however, be offended at us being so precious with the footage. Aaah, what a sense of humor she had! Gone waaaay too soon.

But I digress…. I think my selfish desire to have Carrie in Episode IX may be out of line with what many other fans think is appropriate. Maybe it is correct and respectful to finish Leia’s storyline with Episode VIII. Sigh. Okay. I’m gearing up for that big, traumatic moment in Episode VIII when Leia is gone forever (remember the R2-D2 moment at her memorial?). And I’ll be bummed for years. But maybe, just maybe, being bummed is exactly the right thing. I mean, heck, we’ve lost Carrie Fisher. Which means it’s time to say goodbye to Princess Leia… Maybe this is the right decision. But it still sucks.

She’ll always be our princess.

One thought on “IS IT A GOOD DECISION FOR CARRIE FISHER TO NOT APPEAR IN ‘EPISODE IX’ OF STAR WARS?”