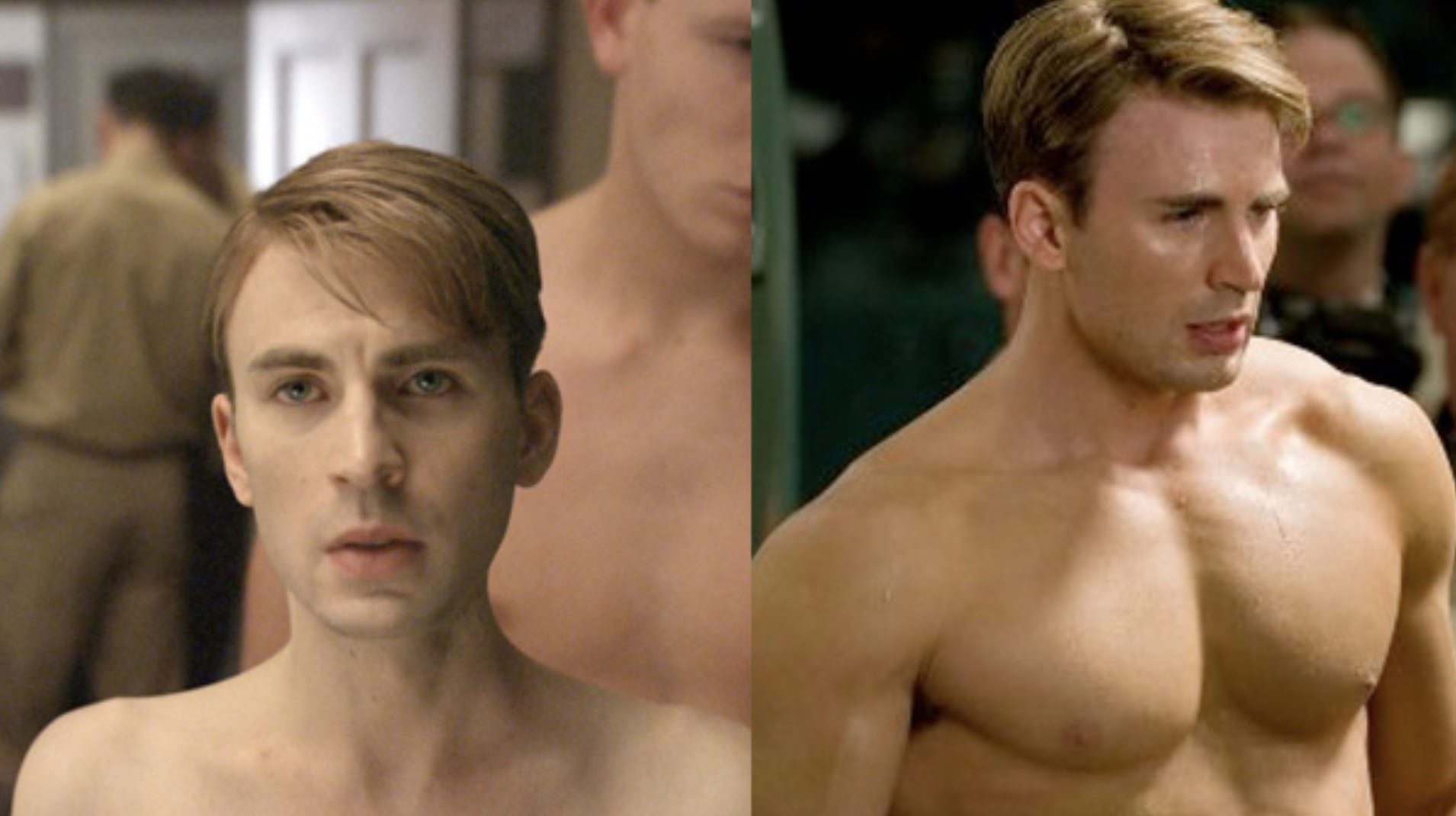 Resident “in-shape nerd” Derek Samms lays out the reasons we should all hit the gym. 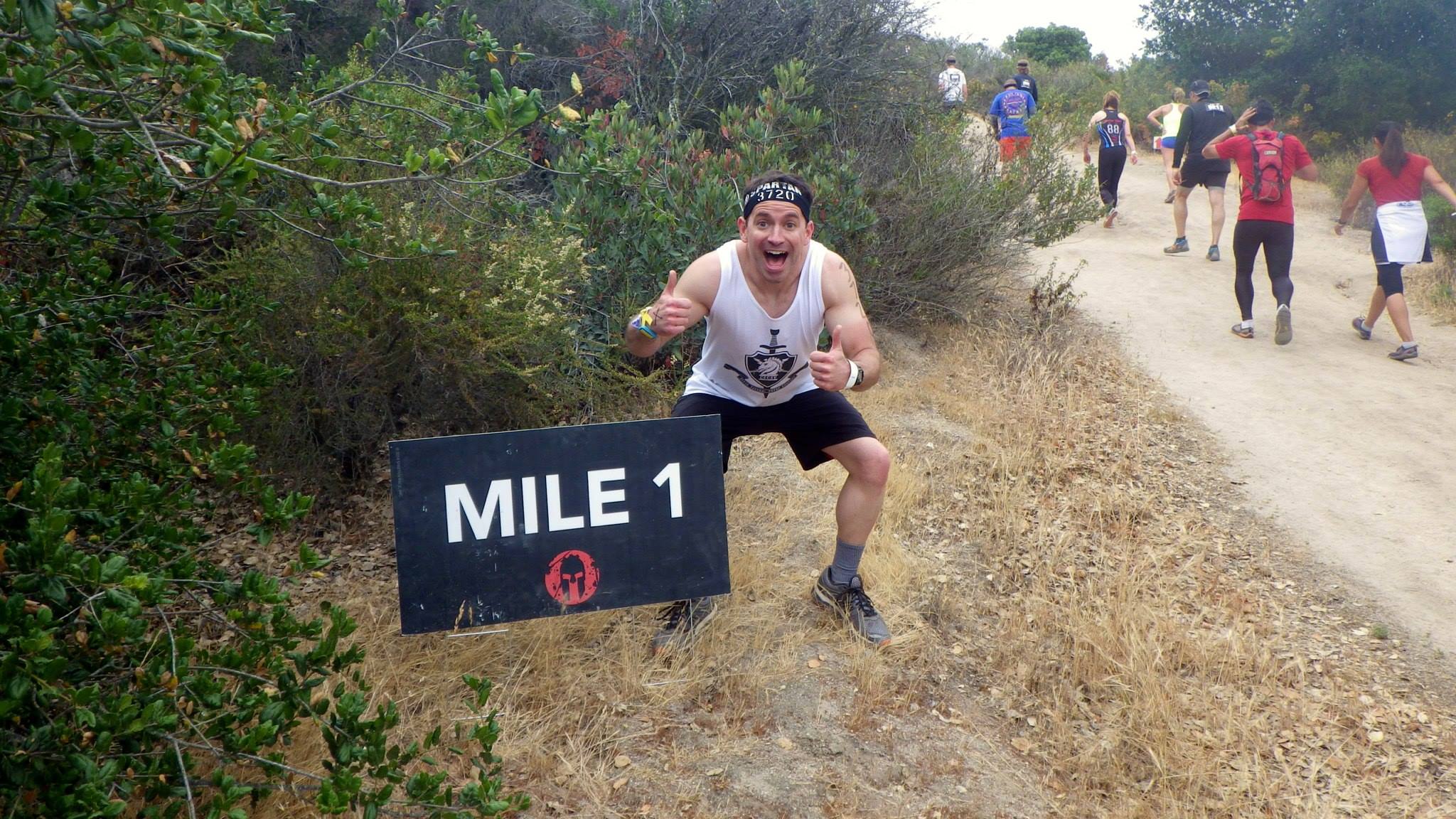 When I first went to Comic-Con, I would see ripped guys doing cosplays of Spartans from 300 and think, “Whatever… there’s no way you were a nerd.” I was wrong to judge them so quickly. While there are no doubt plenty of guys who choose costumes only for the sake of showing off their glistening washboards, there are plenty of true fanboys that have just decided to take care of themselves. I used to put myself in a box, thinking I belonged in the library and not a gym. But you know what I’ve learned? I can love both! And so can you. Here are some reasons why…

DISCLAIMER: I’m not an expert on fitness, learning styles, or you. My goal here is just to give you a little information and point you in the right direction to get started. As with anything, check with your doctor before you make big changes to your lifestyle, and make sure you play it smart by getting the best information and listening to your body.

You can hear Derek discuss fellow nerds and their fitness in this Con Guy Show.

Unless you’ve been living under a rock for the past 15 years (or maybe just hiding out in a basement playing WoW), you’ve probably noticed the cultural shift that has let all fanboys, hackers, and mathletes step blinking into the sunlight and be proud of who they are. The lines between the classic high school cliques have blurred, and now it’s not uncommon for a quarterback to admit to loving Superman and Star Wars, or for bigger and bigger crowds to gather for midnight showings of the latest Star Trek or Marvel movie.

Whatever the reason, buff geeks and dorky jocks are out there, and the numbers are growing. I can’t even begin to tell you how many guys I’ve seen at my gym sporting superhero logos, some of them with extra-thick glasses to complete the ensemble. I’ve had tons of conversations about conventions, animation, and the escapist movies we’re excited about. Just as nerds don’t have to hide their true passions anymore, we also aren’t confined to a few select interests. That doesn’t mean I’ll get into sports, but it does mean you can try something “athletic” and like it.

Yes, it’s a cliche, but it’s been repeated because it’s true. Strength is a choice. Endurance is a choice. If your mind is powerful, it can force your body to be, too. It’s a lot harder the other way around, so we nerdy types have a serious advantage.

Sometimes the hardest part about working out is making yourself actually do it. Convincing yourself that you can complete one more rep or run one more lap is no harder than envisioning yourself completing a campaign in D&D. If anything, it probably takes less imagination and a similar amount of stamina. If you can fantasize about hunting orcs or battling with lightsabers, you can envision your goals and drive yourself to reach them. In fact, you’ll probably be surprised just how much you can accomplish.

That’s because of another skill you’ve kept hidden…

We latch onto things and don’t let go. We sit down to a new show on Netflix and watch EVERY… SINGLE… EPISODE. We spend entire weekends playing Civilization or questing in Azaroth. We stand in line for six hours and then sleep on the ground for a chance to wave hello to Misha Collins as he jogs by before going inside to hear him on a panel. We see things through, and we don’t quit.

That kind of stamina comes in handy when you’re jogging and feel like the little creature from Alien is about to pop out of your chest, or when it’s time to go back to the gym and your limbs already feel like Gilderoy Lockhart cast a bad spell on them. It’s in those times that you need a special kind of stick-to-it-iveness to keep doing what you set out to do. And you know what? You already have that willpower. You’ve used it doing things like I listed above, and this is just channeling it in a new direction. 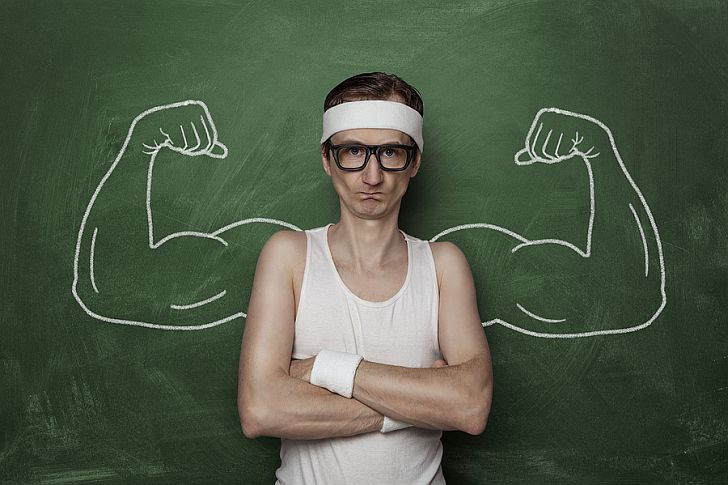 How long did it take you to learn the names of the original 150 Pokemon? Did you also memorize the inscription on the One Ring in the Black Speech of Mordor? And how many times have you tried to explain to your friends who was who in Westeros? We can process a lot of information and understand new systems like nobody’s business. We’re hardwired to solve puzzles and learn new things. If we can do all that, why shouldn’t we be able to learn how to build a good workout regimen and a diet plan?

I know, I know. There are different styles of learning. I’m a mostly visual (with the eyes) and tactile (with the hands) learner, but when it comes to kinesthetic learning (knowing body position and using large muscle groups), I drop to the bottom of the class. I can handle Rubik’s Cubes and origami, but trust me, you do NOT want me on your soccer team. In spite of that, I was able to learn my way around the weight room pretty quickly.

We nerds know how to pick up on processes, and if a physical movement is straightforward and basic enough, we can learn that, too. We also know how to do research. There is a plethora of resources out there on fitness, so whether you want to lose weight, gain muscle, or run a marathon, it will only take you a few clicks to get started collecting the information and details you need. Bodybuilding.com isn’t just for body builders, and you don’t have to be a triathlete to pick up Runner’s World. You’re a learner, and that’s all you need to get started. 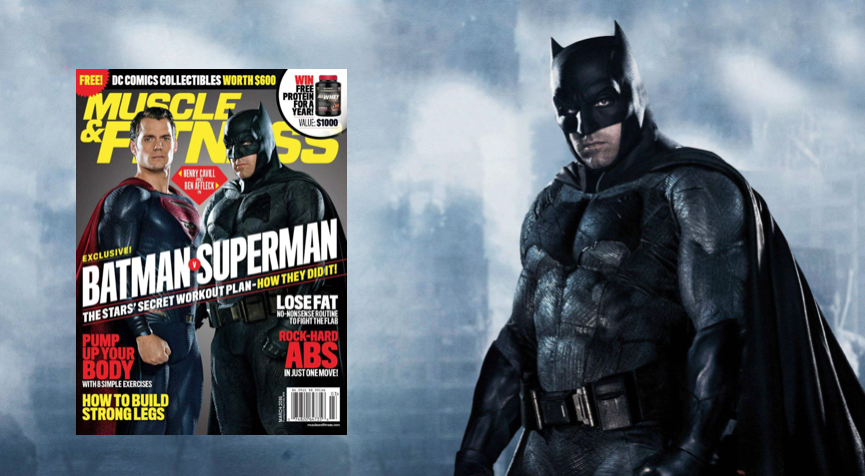 If you’re like me, you know how to work with numbers, and most fitness programs require a lot of that. Whether it’s figuring out how many grams of each macronutrient you need in a day or adding up the weights you’ve put on a barbell, there’s a lot more math to fitness than some people realize. Even if you had a C-minus in P.E. that counteracted your A+ in trig and dropped your GPA (not that that ever happened to anyone I know), knowing how to calculate gives you a serious advantage.

You won’t be lifting a car over your head, but you might be able to fill out the space behind that S on your chest a little better, and that’s a good feeling. It also feels good when you bench more than you did last week or get your run time down by a few more seconds. You know what feels even better? When a sweet old lady at the grocery store needs help loading stuff into her car, and you heft it all for her in one smooth, clean move. Or when you charge the convention floor early to get that one exclusive your wife/husband/best friend wanted, and you’re able to beat the crowd just in time because you’re that fast. It’s not just about looking good. There are plenty of noble reasons to be fit, too. 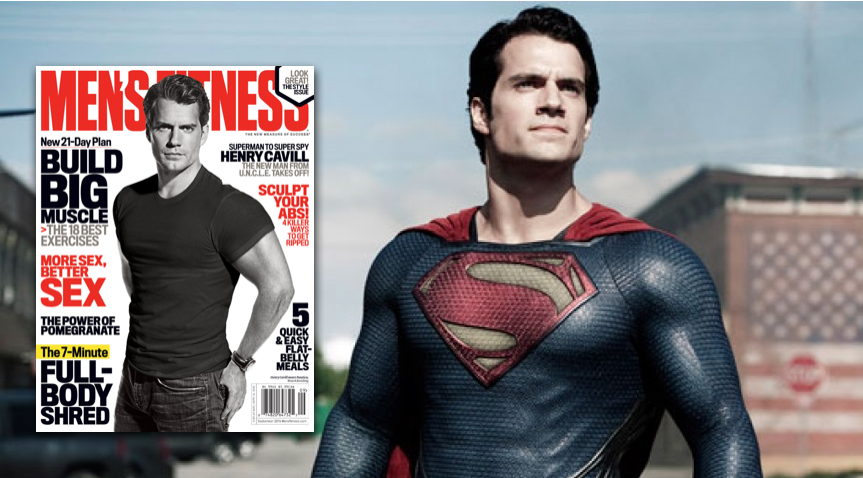 Seriously. Try not to be motivated when the Star Wars fanfare or the Superman theme comes through your earbuds. My workout playlist includes a ton of soundtrack music like How to Train Your Dragon and the Doctor Who theme, and it gets me going every time. When I’m on the treadmill, I’m not just logging miles. I’m running from Daleks, rescuing the hobbits from Isengard, or charging down corridors to get that last horcrux. The right music makes a world of difference for your workout, and when you’re a geek, there’s some great stuff to choose from.

I know the gym can be scary when you’re knew to it, but we’ve all been through far worse. Maybe you’re a fan of horror films, or maybe you found a child in a gas mask wandering around London and asking if you were his mummy. You’ve seen scary before, and you’ve dealt with it. We’ve all been made fun of. We’ve heard the words NERD ALERT after we’ve corrected somebody (seriously, “khaleesi” is a title, not her name!) and we’re over it. We have a thick enough skin that we can wear spandex and a cape in a crowded city while we stand in line for hours, so what do we have to fear at the gym? A little physical exertion? Please…

Who would you rather see more of at the gym: the oafish type who grunts loudly and leaves weights lying on the floor after he’s done, or the obsessive-compulsive type who talks like an educated human being and always puts weights back? In my experience, nerds tend to be more like the latter, and that’s a much better crowd to have around. 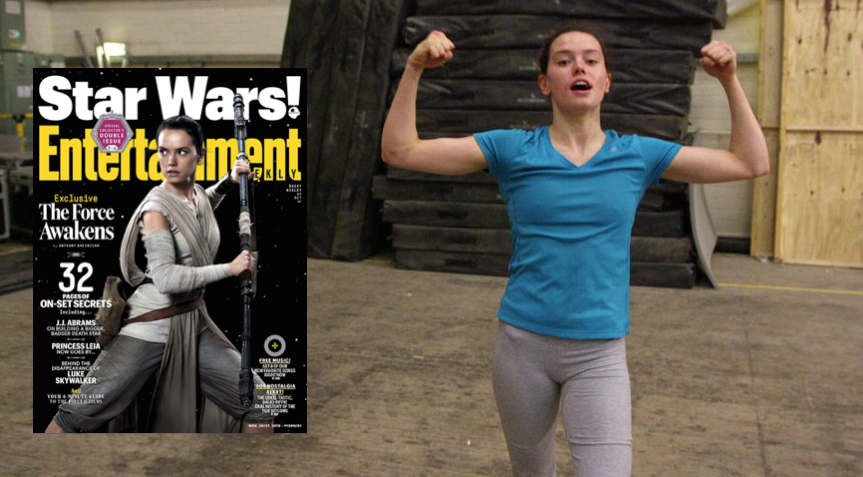 Whether you’re expecting zombies, a Mad Max desert world, or a Sharknado, chances are you’ve already thought of a contingency plan. Maybe you already have a bugout bag in your closet. What you need next is the physical fitness to go along with all that mental and logistical preparation. If those zombies look more like World War Z than Walking Dead, you want to be able to run. If a hammerhead flies through your window and lands on your bed, you want to be able to shove it off. And let’s be honest, with all the plans you’ve made, your group will want you to stay alive. 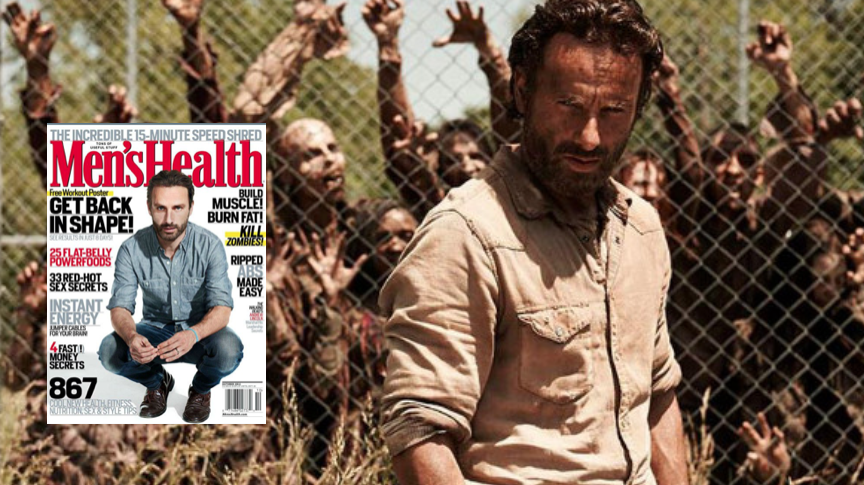 You’re an important asset, so take care of yourself. And if you want to dress as a Spartan for the next convention, just do it and be proud.

Reach out to Derek Samms at @ConGuyDerek