Chuck Palahniuk is back with more mayhem, chaos, and more Tyler Durden. The author of the 1996 cult-classic Fight Club book, the basis of the 1999 film by David Fincher, joined editor Scott Allie and artists David Mack and Cameron Stewart at San Diego Comic Con to discuss their upcoming Dark Horse comic-book sequel.

Fight Club 2 picks up a decade after the first book, and finds the narrator–now named Sebastian–married to Marla Singer, with whom he has a nine-year-old son. Tyler Durden, of course, enters the picture to shake things up. And all we can hope for is that mayhem ensues.

The packed-house crowd loved Palahniuk’s description of how far he pushed the boundaries in his storytelling, going even further than film would allow. And weirder still, Dark Horse announced that Chuck Palahniuk would be appearing as a recurring character in the Fight Club 2 following from issue #4 onwards. Very cool.

And get this: Palahniuk said that David Fincher and Trent Reznor (of The Social Network fame) are collaborating on a new Fight Club rock opera. They’re working with Julie Taymor, director of such big Broadway productions like “The Lion King” and “Spider-Man: Turn Off the Dark.” Fight Club is back, and it’s kicking butt. Yeah, yeah, we remember the first rule of Fight Club, but we couldn’t help ourselves: we had to talk about it. Tyler’s gonna wash our mouths out with soap! 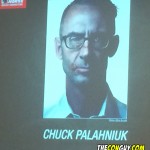 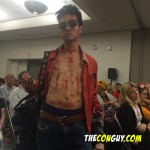 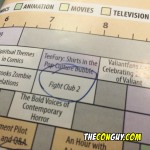 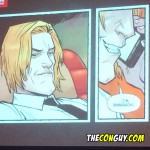 Tyler’s back in Fight Club 2. 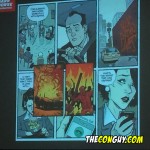