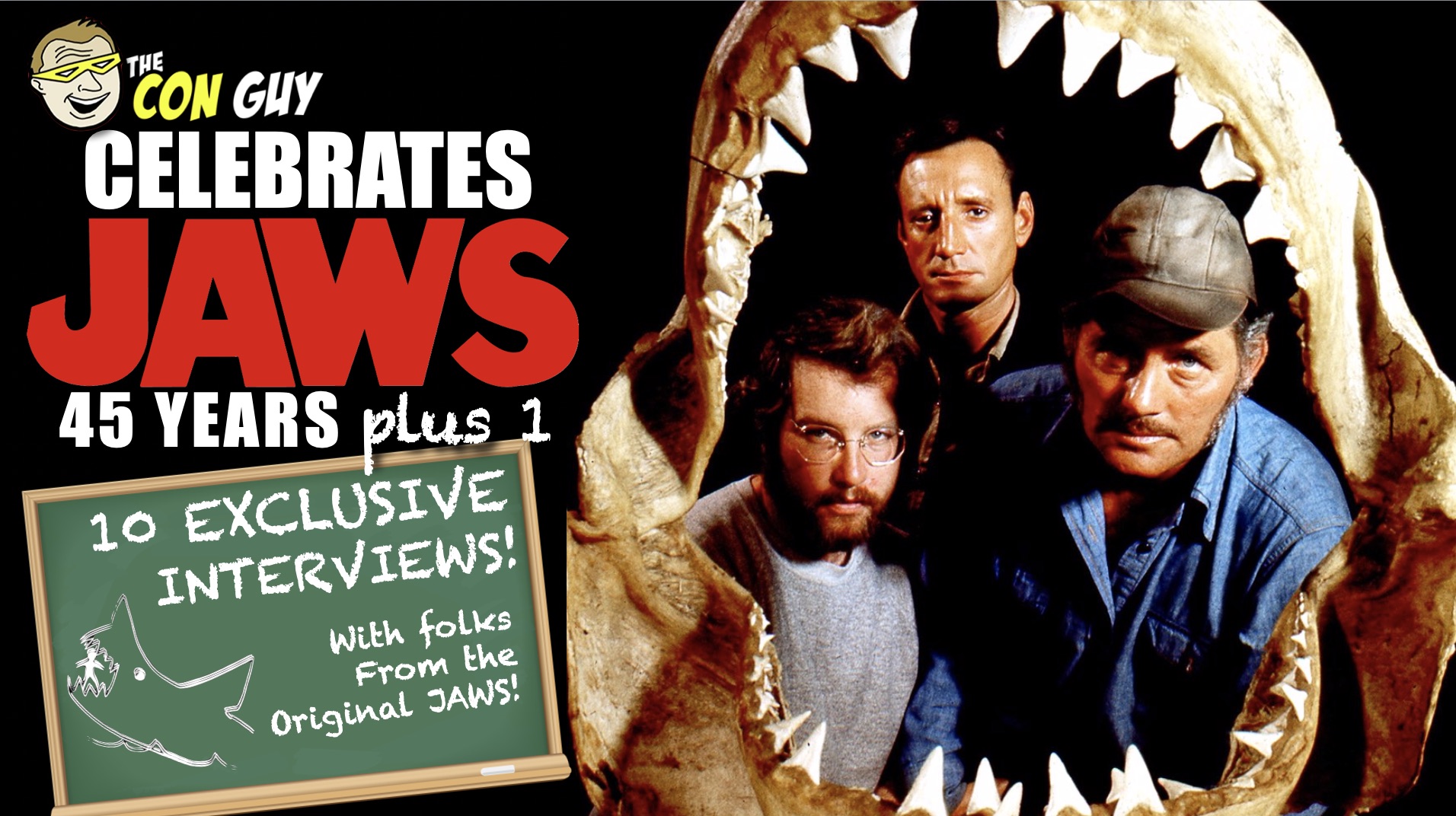 It’s been 45 years (plus 1) since a Great White shark named Bruce terrorized theaters and convinced a generation of people to stay out of the water! Steven Spielberg’s classic JAWS is the movie that launched summer blockbusters, and—many agree—is the best blockbuster of them all! To celebrate this classic film that forever changed the way movie are made, we’ve gathered together 10 interviews we’ve conducted with people who either worked on the original film, or—like Hollywood makeup legend Greg Nicotero—are massive fans and have gotten involved with the fandom in big ways. And we kick it all off with this LIVE Con Guy Happy Hour where we preview everything… ENJOY!

DAVID H. HAMILTON (son of Murray Hamilton, aka Mayor Vaughn)
It’s the mayor of Amity Island! We talk with DAVID HAMILTON, whose dad played the mayor in both JAWS 1 and JAWS 2. Mayor Vaughn just wanted to keep the businesses open on Amity Island, and protect the financial interests of the business owners, right? As he said: “You yell ‘Barracuda,’ everybody says, ‘Huh?’ You yell ‘Shark,’ we’ve got a panic on our hands on the Fourth of July.’ Gotta’ love those jackets!

CARL GOTTLIEB
Legendary writer and actor Carl Gottlieb discusses his history as an actor, comedian and writer in Hollywood for such TV series as The Bob Newhart Show, The Smothers Brothers, and The Odd Couple, along with films such as The Jerk and Caveman, before taking on the film that forever changed his life—JAWS. Hear inside stories about the making of Steven Spielberg’s seminal summer blockbuster from the man who knows!

JEFFREY KRAMER, who played Deputy Hendricks
Actor Jeffrey Kramer is a LOT of fun to talk to. Fans will recognize him as the somewhat hapless Deputy Hendricks from the first two JAWS films, but his life has been anything but hapless ever since. As a successful TV producer, he’s always busy and always creating something new, but he loves to recall his time as the second-in-command deputy who helped Roy Scheider’s Chief Brody come to grips with a great white terror off the shores of Amity Island in the classic JAWS films. And he gets a kick at what kids now yell as they’re jumping off that old bridge in Martha’s Vineyard, where JAWS was filmed. Watch the exclusive interview here:

JEFFREY VORHEES, who played Alex Kitner
Actor Jeffrey Voorhees (who played Alex Kintner, the young boy who died years ago off the coast of Amity Island while paddling out on his yellow raft in Steven Spielberg’s JAWS), returns to the beach to discuss what it was like working on the iconic film, his life living in Martha’s Vineyard (Amity Island) since then, and why he says, “It pays to die.” This is the third in a week-long series of episodes celebrating the 45th anniversary of JAWS.

JOE ALVES, designed the sharks, and directed Jaws 3
Legendary JAWS Production Designer Joe Alves talks about working on the mechanical sharks for the original JAWS, designing the Orca, and about working on JAWS 2 and directing JAWS 3-D and more. He also built the giant set for Steven Spielberg’s Close Encounters of the Third Kind… still the largest set that Spielberg has ever worked on.

KEVIN PIKE, special effects on Jaws, Back to the Future, and more
On this episode, we talk with film and special effects legend, KEVIN PIKE. Kevin is an American filmspecial effects supervisor, below-the-line talent agent, and screenwriting consultant. He is perhaps best known for supervising the visual effects on the 1985 film Back to the Future. He and his company FilmTrix Inc. were primarily responsible for construction of the modifications that created the film’s iconic DeLorean time machine. His credits also include JAWS, The Last Star Fighter, Return of the Jedi, several of the original Star Trek films, Indiana Jones and the Temple of Doom, Jurassic Park, Fight Club and so many credits we’d need a whole day just to talk about.

GREG NICOTERO
Movie effects and Make-Up Icon Greg Nicotero is the creative force behind The Walking Dead franchise and the new Creepshow series. He’s also possibly the biggest JAWS fan in Hollywood. He shares his first experience seeing the film, which led to him to restoring the only existing shark from the original mold. This is his story.

MICHAEL SMITH and JAYE SMITH (not related), creators/hosts of LET’S TALK JAWS LIVE
As we continue our special JAWS ANNIVERSARY shows, on this episode, we feature Michael Smith and Jaye Smith (no, they’re not related), the creators and hosts of LET’S TALK JAWS LIVE, a weekly interactive discussion group on Facebook that is designed for JAWS FIN-atics who crave a lot more JAWS interaction than just an occasional festival or screening. Let’s Talk Jaws Live is quickly becoming the go-to spot for JAWS discussions and gathering, featuring everything JAWS-related, from the making of the film, Cast & Crew, Jaws memorabilia and even the sequels. Heck, they say they’ll even talk about “Jaws the Revenge.”

DAVE ‘HAMBONE’ HAMBLIN, Hollywood set builder and Martha’s Vineyard local
It doesn’t get any more honest and raw than this! David Hamblen’s Mom and friends call him Hambone. He’s a Hollywood set builder and a Martha’s Vineyard Islander who was there when JAWS was filmed. His Old Man, Ward Welton, painted BRUCE the shark, among other things, and Hambone pulls no punches in this brutally honest behind-the-scenes look at JAWS and growing up on ‘Amity.’ He describes the JAWS crew as ‘glorified f***ing summer dinks;’ he ‘ran bases’ with Spielberg and Schneider; he karate-chopped the white-picket fences; and that’s just the start. “When I watch Jaws,” he says. “I’m watching home.” PLEASE NOTE:This episode contains much more adult language and F-bomgs than our normal episodes. You’ve been warned. It may not be safe to go back in the water! (But you’re sure to laugh you’re a**es off!).

DAVID BIGELOW and JOE ALVES discuss The Orca 3
David Bigelow was a child actor in the Alex Kintner death scene in JAWS. On our show today, he talks about his project Return of the Orca, which is recreating the original Orca in Martha’s Vineyard with the help of the creator of the famous Orca himself, legendary production designer Joe Alves. Joe Alves also discuses creating the original Orca, along with that famous shark. WATCH live right here, or on ThatHashTagShow’s Youtube channel, at 11 a.m. PST… or any time thereafter. (Update: the goal of the project was not met, but plans are still underway for the restoration).