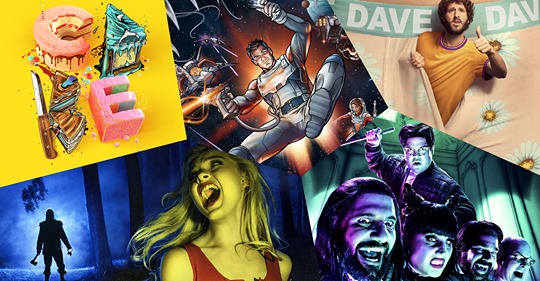 Each year, FX hosts one of the biggest and most eagerly anticipated offsite at San Diego Comic-Con. They usually take over the lawn between the Convention Center and the Hilton Bayfront, directly across the street from the line for Hall H. It’s usually large and involves multiple FX shows, such as American Horror Story, It’s Always Sunny in Philadelphia, The Strain (remember that Statue of Liberty with the lizardy tongue???). So it was cool to find out that they’d be having another offsite this year! But since everything is shut down and indoors, they’re hosting FX UNLOCKED, an totally digital experience that will be going on at the same time as Comic-Con@Home.

Here’s everything you need to know about FX UNLOCKED.

Scheduled for July 23 to July 26, fans will unlock exclusive content, games and special virtual activations inspired by their favorite FX series, including What We Do in the Shadows, DAVE, Cakeand American Horror Story.Despite the virtual setting, fans will still have the chance to win FX branded prizes just like they would in person by unlocking the world of FX at FXSDCC.com starting July 23.

FX’s full line-up of digital experiences for Comic-Con@Home include the following:

With the pandemic forcing the cancellation of live events across the world, FX was tasked with replicating the fan experience at San Diego Comic-Con for the new online and remote reality. Working with experiential agency Creative Riff, FX designed captivating digital experiences that generate enthusiasm and build hype for their shows.

“We will miss attending the traditional event this year, but the silver lining is that with FX Unlocked we can engage with fans from across the country. We see this as an opportunity to forge an even stronger connection with our audience and make our shows part of this virtual celebration.” says Kenya Hardaway, Senior Vice President, Integrated Promotions-Multi-Platform Marketing at FX Networks.