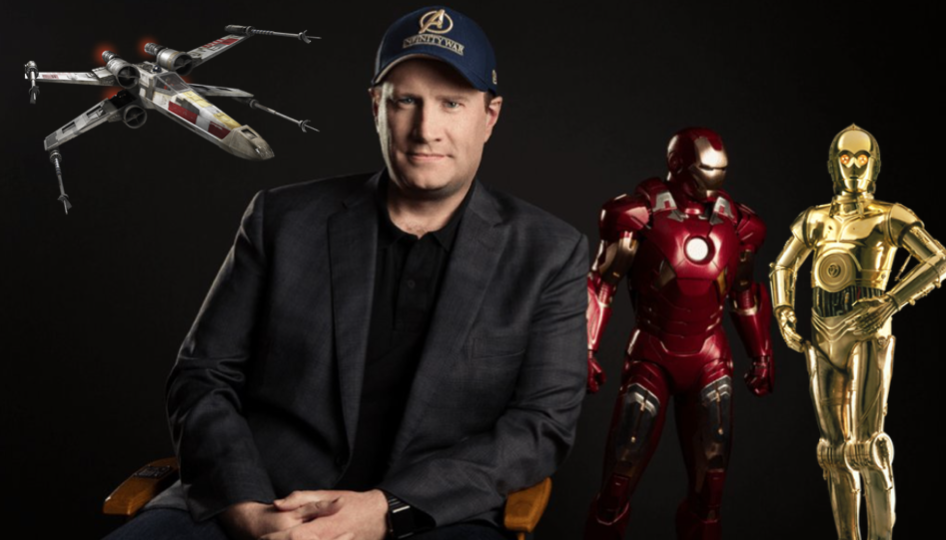 There was a “disturbance” in the Force last night as a million fanboys/girls cried out in JOY/TERROR….because the news broke that ultimate fanboy KEVIN FEIGE, who is THE FORCE in the Marvel Universe, has been given the keys to an upcoming Star Wars film. And as can be expected, fans are talking. Many are singing the praises of Feige as the savior that Star Wars needs. Others, though, have already pounced on the news as a way to criticize the parts of the Marvel films that they don’t like. And, of course, the pro/anti-“Star Woke” crowds have all kinds of opinions. Which leads us to wonder: Is it possible to discuss Star Wars these days without breaking down into an all-out war between us?

First, here’s the news, as reported by The Hollywood Reporter:

“To the surprise of no one, Kevin Feige is a huge Star Wars fan. It might surprise many, however, that the Marvel Studios chief is going to be developing a Star Wars movie as Lucasfilm president Kathleen Kennedy makes new plans for a wave of projects set in the universe, The Hollywood Reporter has learned. Feige had discussed a foray into the Star Wars universe in a late summer meeting with Kennedy and studio co-chairmen Alan Horn and Alan Bergman, sources say.”

Okay, that sounds pretty exciting, right? I mean, regardless of how you feel about certain characteristics of the Marvel films, there’s no denying that Feige has the magic touch (Midas touch) when it comes to crafting giant franchise-spanning epics…. Feige has pushed Marvel into a rarified place as the biggest blockbuster producer ever. It has produced four of the top 10 movies ever released, with  Avengers: Endgame standing atop the heap with a mind-shattering $2.9 billion. Fans worldwide worship at the later of Feige. So it might make sense to bring him. After all, the Force is definitely with him, wouldn’t ya say? Well, that’s where the controversy starts.

Per the article, “Some see this move as a prelude to a larger role for Feige within Lucasfilm, while others say it merely reflects the Marvel executive’s passion for the franchise…. while Feige has presided over a mostly seamless rollout of one Marvel hit after another, reinvigorating the Star Wars franchise has not been a smooth process.”

That’s putting it lightly. Besides a revolving door of directors being fired or “sidelined” (Gareth Edwards, Phil Lord and Chris Miller, Colin Trevorrow), the films coming from Lucasfilm haven’t been universally well-received, especially the immensely polarizing THE LAST JEDI. That film, it seems, has become the battle line between two factions in the Star Wars fanbase. Those who loved it for going in new directions, and those who hated it for ruining the legacy of Star Wars. It’s important to note, however, that SOLO was the film directly following THE LAST JEDI, and it’s box-office performance was horrible. Add to that the fact that the Star Wars: Galaxy Edge lands at both Disneyland in California and Disney’s Hollywood Studios in Orlando have bene underperforming, a fact that some have attributed to the reaction to THE LAST JEDI.

To add even more flavor to this stew, it’s interesting to note that besides Feige, the helmers for the next batch of Star Wars films have already been announced, and let’s face it—they’re not without controversy. Last Jedi helmer Rian Johnson and Game of Thrones showrunners D.B. Weiss and David Benioff are working on projects set in the Star Wars universe…. and all three have been the target of fan ire lately because of the mixed reactions to their respective previous projects. Both Last Jedi and Game of Thrones had angry fans up in arms (Thrones because of it’s seemingly rushed and ill-planned final season had many viewers demanding a re-do of the final season). But it’s good to remember that not everybody was angry…. some fans actually like Last Jedi, just like some fans are satisfied with the final season of Thrones. In other words–it’s just a matter of perspective and taste.

OUR TAKE: Intriguing. We love the Marvel films, and all the haters can just keep on hating. We’re also life-long Star Wars fans who have enjoyed the recent slate of films to a certain degree less than anticipated. And a little bit of Kevin Feige in the Star Wars universe might be a good thing. THAT’S NOT HATE, for crying out loud, it’s just an opinion. Because there is A LOT to love about the new Star Wars films (“Chewie, we’re home” is one of the most inspired and heartwarming lines in all of cinema, in my opinion!).  We think that The Last Jedi was not the greatest film. Solo, however, deserved a lot more attention than it got. We just hope Feige can infuse a bit of that Marvel magic into whatever project he’s tackling…. and can we just give him the benefit of the doubt? Why start hating now? There used to be a time when the mention of a new Star Wars film raised joy in all of us…. now it sets up battle lines for people who want to fight. Fine. I’m on the side of the “I love Star Wars” side. I’m on Kevin Feige’s side. I have issues with some of the decisions that have been made, yes, but I’ve not lost my love for the franchise. (and I have hope—A NEW HOPE—that J.J. Abrams might just “fix” some of the failings of The Last Jedi). Hope!

Me, when Sony says #KevinFeige is too busy for #SpiderMan but it's announced that he's producing a Star Wars film as well as everything at #MarvelStudios. pic.twitter.com/snLNm9wVkP

This should be good.