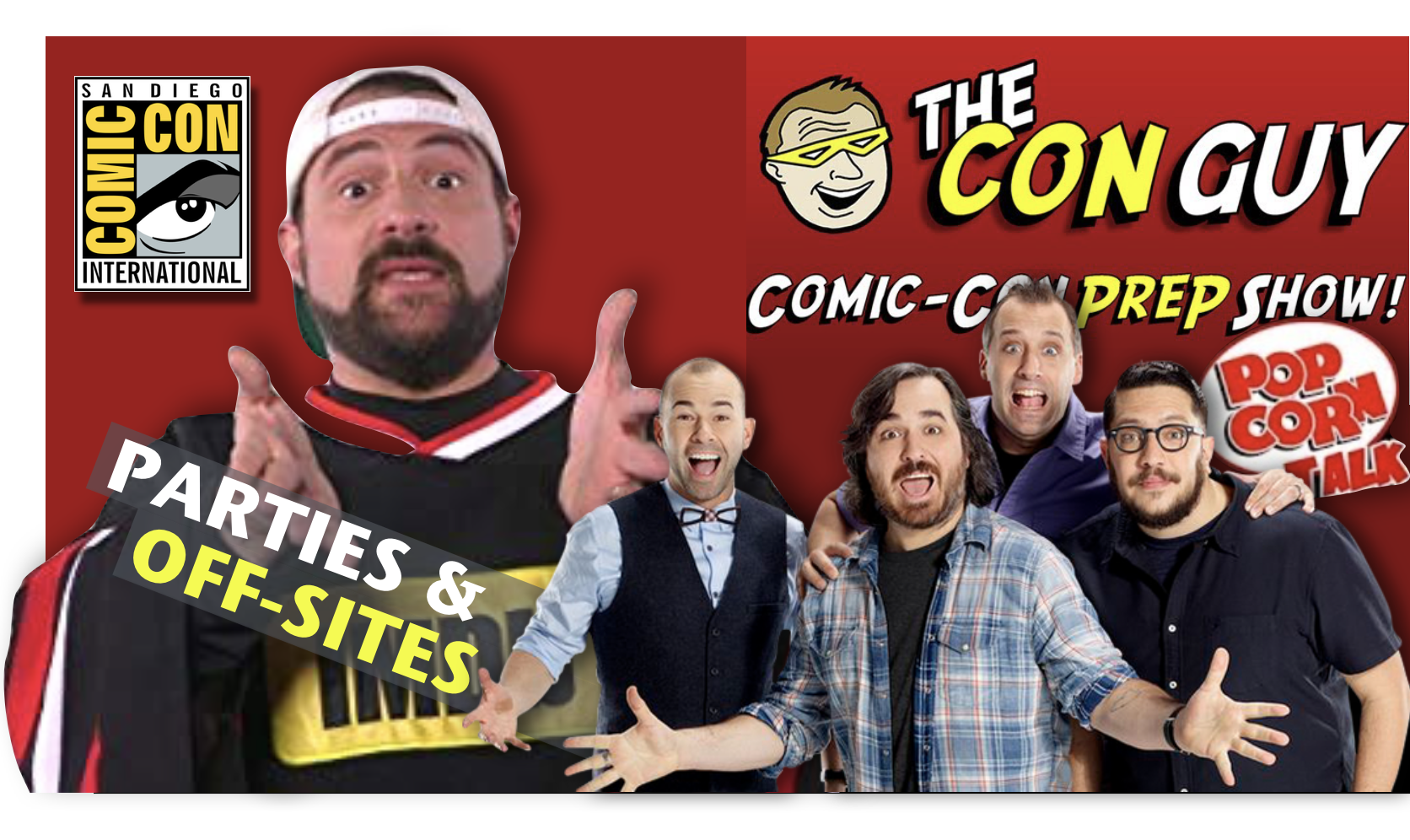 This is our final CON GUY SHOW before San Diego Comic-Con. This week we list and discuss all the big parties and off-sites that will be in San Diego this week. From the biggest celebrity parties (Entertainment Weekly) to the most fan-friendly events (National Geographic’s Nerd Night), we break down the events and off-sites we think you’ll enjoy. Right here on this week’s show.

Nerdist House:
Nerdist House at Sparks Gallery! That’s right, we’re returning to San Diego with entertainment, hang-outs, live Nerdist shows, a VR experience based on the sci-fi series SONA, a party for the 200th episode of Bizarre States and much, much more. Sparks Gallery is located at 530 Sixth Avenue. Nerdist House is open to the public and free of charge, and you do not need a Comic-Con badge to attend. We’re celebrating all things Nerdist, Geek & Sundry, and Alpha with live editions of shows such as Nerdist News, Because Science, and Talkin’ Toons. And you never know who you’ll see at Nerdist House, because all kinds of special guests are stopping by. We’ll have meet and greets with our incredible talent, authors V.E. Schwab, R.A. Salvatore, and Cory Doctorow, Talkin’ Toons host Rob Paulsen with special guests Maurice LaMarche and Randy Rogel, among others. https://nerdist.com/sdcc/

Castle Rock activation
Tour the town of Castle Rock’s bed and breakfast and explore its vast forest, with surprises around every corner. Visitors will question what’s real and begin to understand why Castle Rock is called the unluckiest town on Earth as they journey through the multi-room experience. A Hulu campsite lounge will also serve as a refuge from the chaos of Comic-Con while offering a preview of the Hulu series. Intersection of Front Street and Island Avenue, Thursday-Sunday.

GRAND DESIGNS “EXPERIENCE” (formerly the Petco interactive zone)
Here’s a look at some of the activations:

From Syfy at The Experience:

Cloak and Dagger activation
Freeform and Marvel bring “The Experience” to Petco Park with two different interactive events. Features a re-created moment between characters Tyrone and Tandy when their powers interact in which a bungee will propel fans backwards and a slow-motion recording will capture the moment. Thursday through Sunday at Petco Park starting at 10 a.m. daily.

DC Universe activation
The forthcoming subscription streaming service is offering a look at its upcoming content as people can walk through original, classic and comics soon to be available on the platform. The larger than life installation will also have interactive spaces that bring iconic characters and stories to life. Thursday-Sunday. Preregistration: http://dcuniverseexperience.com/

The Good Place experience
Immerse yourself in the philosophical world of the NBC comedy as the activation transports attendees into the neighborhood depicted on the series. Guests can become part of the scene and relive unforgettable moments. Thursday-Sunday, Gaslamp Square between the convention center and Hard Rock Hotel.

Jack Ryan Training Field
Experience the world of Amazon’s forthcoming drama with a VR experience at the park at the corner of First Street and Martin Luther King Promenade, across the street from the convention center. The 30-foot-tall facility uses Optitrack 4D and Oculus Rift tech to create experiences ranging from rappelling from a helicopter and ziplining. 9 a.m.-7 p.m., Thursday-Saturday; 9 a.m.-5 p.m. on Sunday.

The Purge‘s Purge City store
The immersive experience transports shoppers into the world of USA Network’s The Purge with a tongue-in-cheek, one-stop shop for the perfect Purge Night, where “Purge City” staff will help visitors stock up on emergency candles, masks and energy drinks. Shoppers can also take part in product demos, photo ops and get a glimpse of the TV series based on the Jason Blum feature of the same name. Free. 215 Tony Gwynn Drive, Thursday-Saturday, 11 a.m.-7 p.m., Sunday from 11 a.m.-4 p.m.

South Park activations
Comedy Central is hosting a Cartman-themed escape room for the animated favorite in which 10 fans will have a limited amount of time to solve a series of puzzles using what they know about the show to free themselves. Thursday-Saturday, 9:30 a.m.-7 p.m.; Sunday 9:30 a.m.-5 p.m., San Diego Wine Center, 200 Harbor Drive #12, across from the convention center. Free.

The Walking Dead‘s “Dead Quarters” | The activation returns for its second year as the immersive experience features a curated walk through settings (the Sanctuary) on both the flagship drama and spinoff Fear the Walking Dead. Plus a 22-foot zombie slide, photos with Negan’s “flaming Lucille” and other activities. Martin Luther King Promenade in front of the Hilton Gaslamp Hotel at Fourth Avenue and L Street. 11 a.m.-6 p.m., Thursday-Saturday; 11 a.m.-4 p.m., Sunday.

The Ready Player One Challenge
San Diego Comic Con is inspired by the hit film from Steven Spielberg will kick off Wednesday, July 18 from 5PM – 7PM and will be open daily July 19 – 21, from 10AM – 7PM and on Sunday, July 22 from 10AM – 5PM. Admission is free. Step into the OASIS and join in an adventure too big for the real world! Sign up here: https://www.readyplayeronechallenge.com/rsvp.php

TEAMCOCOHOUSE will be open beginning Wednesday July 18th through Saturday July 21nd. Located at 327 Fourth Ave, a few blocks from the convention center, TEAMCOCOHOUSE will showcase a daily lineup of comics handpicked by Conan, podcasts, panels, screenings, giveaways and special appearances by friends of Team Coco, as well as O’Brien himself. RSVP here. http://www.tbs.com/teamcocohouse

LEGION M. With support from Skybound Entertainment, Legion M will host the Fan Lounge on Thursday, July 19 – Friday, July 20 from 10AM-7PM, or on Saturday, July 21 from 10AM-5PM. The event – set for the Harbor House Restaurant (831 W. Harbor Dr) will be the home of activities, contests, appearances and more to coincide with the popular Skybound Livestream powered by NONGSHIM, which will welcome high-profile guests, gamers and comics pros (including Guardians of the Galaxy‘s Michael Rooker and world-renowned film critic and historian Leonard Maltin, and others). In order to attend, you’ll need to RSVP at legionm.com/sdcc2018.

THE GOOD PLACE:
NBC will be transforming downtown San Diego into The Good Place, with a replica of the neighborhood from the show. Located in the Gaslamp Square in front of the Hard Rock and Omni hotels: RSVP at https://www.thegoodplacesdcc.com

Adult Swim on the Green
From Adult Swim: “We’re building our own State Park and exposing you to all the nature you came to Comic-Con to avoid. Enjoy a relaxing afternoon watching some chainsaw-wielding wood carvers and get your buns toasted on our mechanical hot dog roaster. Have some s’mores around our midday bonfire while enjoying our streams, and visit the camp store so you can stock up on the merch you’ve been begging for (yeah, store’s back)! You can pretend to be William Tell and even challenge your fellow humans to canoe races around our lazy river. It’s going to be just like the good old days we imagine happened, sometime.”

Pinball Lounge: Attendees will have their chance to play the hottest titles from Stern Pinball at Comic-Con International’s official Pinball Lounge located directly next door to the Convention Center at the Marriott Marquis Pacific Ballroom 14-16. Come with friends for the free play games and stay for the daily high score tournaments with prizes! FREE

Square Enix is creating the ultimate Tomb Raider experience where players can become lost in an immersive world. Play the hands-on demo of the highly anticipated Shadow of the Tomb Raider, enjoy exotic survival food, shareable photo opportunities and much more. Lara Croft’s defining moment is coming, but don’t miss your chance to get a sneak preview! Join Square Enix at the Deck at Moonshine Flats from 1PM – 10PM, Thursday, July 19, through Sunday, July 22.

“Overwatch Payload Tour” July 18th through the 22nd at the Omni Hotel Floor 4 Grand Ballroom. In this activation, folks can choose from a selection of Overwatch prop weapons, step into a 360 degree rotating stage that transforms into an Overwatch map, and share a video of the experience. Each participant will receive an exclusive Overwatch pin.

Bob’s Burgers on Friday. Fox is celebrating the upcoming 150th episode of its animated comedy Bob’s Burgers, as well as the show’s move this fall to 8:30 p.m. Sundays, by partnering with Shake Shack for a day-long activation on Friday with the cast and producers at one of the hamburger chain’s San Diego restaurants. That day, the network will use a Bob’s Burgers-wrapped bus to transport Comic-Con attendees from the San Diego Convention Center to the Mission Valley Shake Shack, which will feature Bob’s Burgers/Shake Shack branding and artwork on the restaurant’s patio. Fans will also be able to take shareable photos of themselves sitting at the Bob’s Burgers counter. Fox will provide 500 free meals—the burger of the day, fries and a drink—to hungry Comic-Con attendees. The meals are only available to those who take Fox’s bus from Comic-Con; people who drive themselves to the restaurant will be turned away.