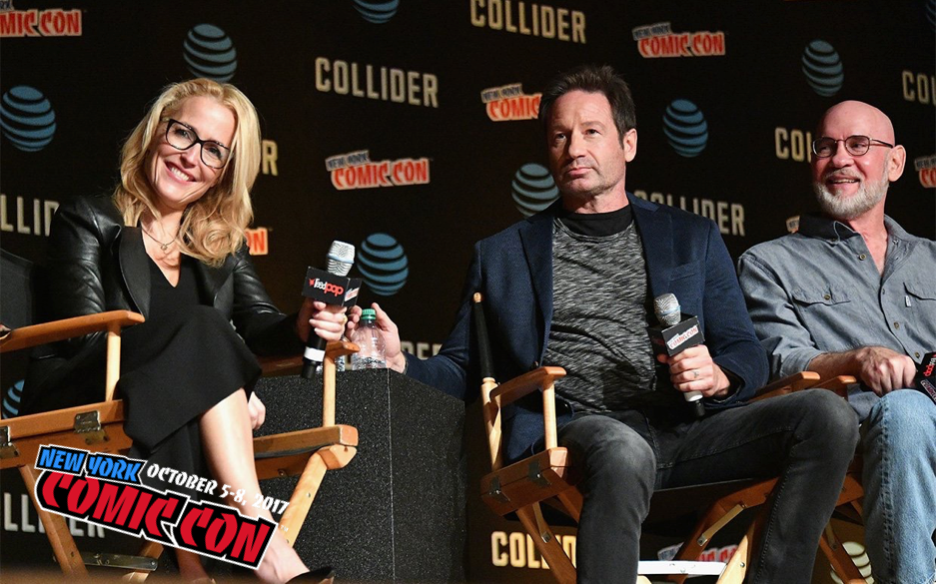 In my opinion, X-Files is the best “monster-of-the-week” series ever on television, bar none! It’s the series from which all present-day supernatural mystery shows have sprung. It’s the MOTHERSHIP (to borrow a UFO term, which seems somehow appropriate). And the X-Files is back! The show’s creator and stars had a panel on the main stage at New York Comic Con, giving fans a jolt of outerspace juice to get them excited about the upcoming 11th season. At just 10 episodes, it’s definitely much shorter than the 26 episodes it used to churn out each season, but’s a bit more than last season’s 6 episodes.

First up…. the trailer!

Series stars Gillian Anderson and David Duchovny, plus Mitch Pileggi and series creator and showrunner Chris Carter took to NYCC’s Main Stage to give fans a peek at the upcoming Season 11.

The trailer didn’t hold back, either! The Cigarette Smoking Man was back, along with monsters, a hint of Lone Gunmen member Richard Langly (Dean Haglund), lots of “William” talk (Mulder and Scully’s son) and everything that made–and MAKES–the X-Files my ultimate must-see appointment TV.

Later, Deadline actually caught up to Carter for a pretty telling interview. Here are some highlights (possible spoilers):

QUESTION: What about the Long Gunmen?

CARTER: Certainly you can expect, if not a reference to them, maybe seeing one of them.

CARTER: We saw it as a really interesting time to be telling X-Files stories. I’ve always felt that the heart of the show was science. Scully’s groundedness was what gave the show a center so that scientific truth was the thing that kept Mulder in check and his belief in conspiracies or certainly pursuit of them was the thing that always set the show on edge or produced the upheaval.

We’re looking at a world where now truth is thrown out the window and conspiracy is now seemingly the center. Everything’s been turned on its head and that’s an interesting time to be telling X-Files stories.

You can read the entire DEADLINE interview here >>>

According to ENTERTAINMENT WEEKLY online:

“The X-Files agents, whose relationship hit a few bumps in the road before 2016’s revival, are “on the same page” this year, Anderson said. Carter even went so far as to say “they get kissin’ close” — though the cheers that followed that statement turned to boos when he was pressed on how the partners’ dynamic in the episodes of season 11 they’ve shot so far compares to what fans saw in season 10. “Mulder and Scully are still professional partners; they’re not romantic partners,” Carter said. “But we do explore that relationship in interesting ways, so hang in there.” Read full article here >>>

Honestly, we’ve got nothing but unbridled enthusiasm for the X-Files…. we couldn’t be happier. But we gotta wonder….how the heck did the Cigarette Smoking Man come back. I mean, didn’t we all see him basically dissolve when that missile exploded in his face back in the series “finale”? (Funny how we have to qualify “finale” with quote marks now).

I don’t think the X-Files could ever be the same without Smokey, but there better be a darn good explanation (preferably alien-based) as to how he survived.

And another thing — can we PLEASE save Mulder’s sister from that dreadful “Starlight” episode, where we find out that she wasn’t abducted, but rather, kidnapped by a child-killer, then turned into star light upon her death?

Okay, I digress…. and for naught, because I’ll still tune in each week to get my “Truth Is Out There” fix. Can’t wait!