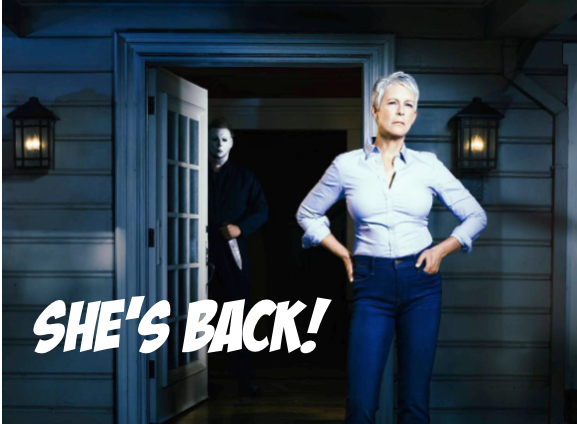 BEST. HALLOWEEN NEWS. EEEEVER! Jamie Lee Curtis confirmed on her own Instagram that she is BACK as Laurie Strode in the next year’s Halloween film, currently in production. She joins her former director John Carpenter, who is coming on as producer and will also be contributing the score (double bam!).

Screw you Rob Zombie — the ultimate “final girl” is back….

From The Hollywood Repoter:

“David Gordon Green, the co-creator of HBO’s Eastbound & Down and director of movies such as Pineapple Express and Our Brand Is Crisis, will helm a new movie that will have a script co-written by him and frequent collaborator Danny McBride. That announcement was made in February by John Carpenter, the co-creator of the franchise and director the 1978 original.

Blumhouse, Miramax and Trancas are the production entities involved. Carpenter will executive produce along with Gordon Green and McBride’s Rough House Pictures.

“David and Danny both came to my office recently with Jason Blum and shared their vision for the new movie and … WOW. They get it. I think you’re gonna dig it. They blew me away,” Carpenter wrote then. “I might even do the music. Maybe. It could be kind of cool. And you’ll get to see it in theaters on October 19th, 2018.”

For a fun look at all things Scary Fun, check out our show THE SCARE GUY… subscribe. We’re bringing you all the best horror movies, conventions, and scary news leading up to Halloween! We’d love to have all our fellow horror freaks come onboard! Check us out!