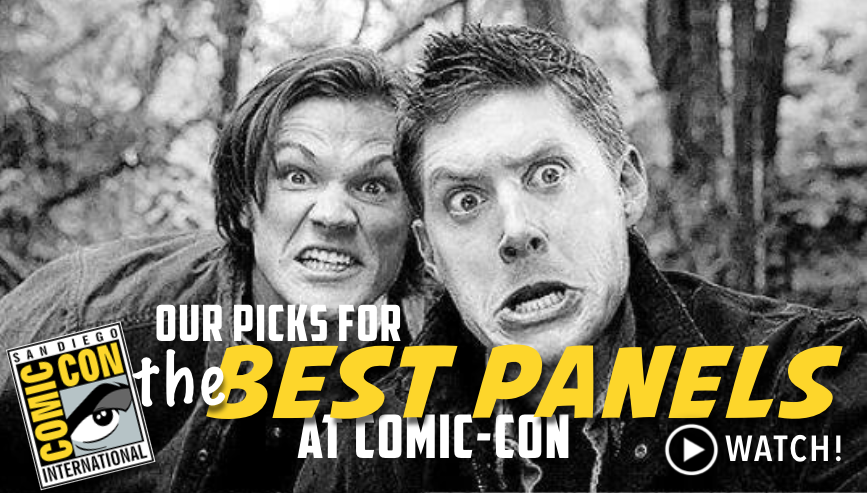 SUPERNATURAL is ruling Sunday of Comic-Con, that we know. It’s a long-time tradition that hopefully won’t be broken for a while… BUT, what about the rest of the convention. If you had to choose panels that a true Supernatural Fan would love at San Diego Comic-Con, what would they be?

NOW, here’s a look at what panels we think a die-hard Supernatural Fan might enjoy, starting on Wednesday and finishing on Sunday. Let us know what yours are.

The first big night of Comic-Con is Preview Night…. and although there’s probably not guaranteed crossover between Supernatural and the other shows on the CW Network, the fact that commercials for CW shows are routinely shown during commercial breaks of Supernatural, it’s safe to assume that a number of fans of Supernatural are also fans of some of the other CW shows, which routinely show up on Preview Night… this year, however, a number of networks are hosting the WB shows.

That said, on Wednesday Comic-Con and Warner Bros. Television proudly continue the annual Preview Night tradition with an exclusive pilot screening of Deception, plus exclusive video presentations of some of the most highly anticipated series of the 2017-18 television season—Krypton and Black Lightning—as well as a brand-new hour-long episode of Teen Titans Go! and special surprises.

OUR SUGGESTION: If none of these shows trip your trigger (preferably on a Winchester-branded gun, right?), hit the floor and get your Supernatural Exclusives! Once the weekend hits, those things will be gone!

2:30
BATTLESTAR GALACTICA REUNION
We have a sneaking suspicion that Supernatural fans have a soft spot for Battlestar Galactica, one of the greatest sci-fi drama ever to grace the small screen. The cast and creators of the Emmy Award-winning Battlestar Galactica will come together for an exclusive Comic-Con reunion. They’ll provide insight into this critically acclaimed hit and look back on some of the show’s most hotly debated moments-the Pegasus arrival, New Caprica, the finale, and the truth about the Cylons.

3pm
1987: The Best Movie Year Ever
If you don’t make it into the Battlestar Galactica Reunion panel, than try this one out: Why? ONE WORD: The Lost Boys! (okay, that’s three, but hey– it’s THE LOST BOYS!). It’s the “We’re Getting Too Old for This S@#t” edition! This expert panel of geeksperts takes a trip 30 years back in time to that great geek year of 1987. Expect untouchable analysis and lethal quips as they look back at Predator, The Princess Bride, Lethal Weapon, The Lost Boys, RoboCop, Near Dark, Spaceballs, Hellraiser, The Untouchables, The Running Man, and many more.

5pm
LEGION screening and cast Q&A
One of grittiest, weirdest, most far-out shows of this past year was LEGION. It’s also one of the best, and it has a lot of the same cylinders that drive Supernatural. Creator/executive producer/writer/director Noah Hawley is joined by fellow executive producers John Cameron, Lauren Shuler Donner, and Jeph Loeband series stars Dan Stevens, Rachel Keller, Aubrey Plaza, Jean Smart, Bill Irwin,Jeremie Harris, and Amber Midthunder for a conversation on what to look forward to from season 2 of Legion .

12:15
For sheer kick-ass action and monster-squishing action, outside of Supernatural, nothing tops The Walking Dead. You can expect the full cast, but probably not an ounce of spoilers–which is exactly what you’ll get in the Supernatural panel the following day. Be warned, though, this panel will be suuuuuuper though to get into.
Hall H

5:15
Marvel’s the Defenders
Cast and creators — this is gonna be one AWESOME panel! And again, most people who like what we like (action; humor; edgy, irreverent characters) will flock to this panel. Marvel’s the Defenders is likely to draw a huge crowd. If you get into The Walking Dead, just make sure you stick around for this likely talk-of-the-show panel.
Hall H

11:30
Warner Archives’ Monsters from Hell
Did someone say monsters???? You’re talking our language! Warner Archive Collection (WAC), Trailers From Hell & Famous Monsters of Filmland join forces to spotlight some of the most beloved (and sometimes overlooked) monster/dinosaur films of the past 70 years. Revel in WAC’s high-definition remastering of cult classics ranging from When Dinosaurs Ruled the Earth, The Valley of Gwangi, Demon Seed and From Hell It Came to some soon-to-be-released on Blu-ray surprises. Trailers From Hell film gurus Mike Mendez (Big Ass Spider, Tales of Halloween), Darren Bousman (Saw II, Saw II, Saw IV), and Academy Award nominated screenwriter Josh Olson (A History of Violence) join WAC podcasters Matthew Patterson & DW Ferranti to delve deep into insights, stories and glimpses behind the scenes of these fan favorites. Gary Miereanu moderates the proceedings.

1pm
The Kaiju Kingdom Podcast: the Resurgence of the Kaiju Film Genre
AGAIN–did someone say monster??? Let’s get a double-helping with this awesome collection of the biggest, baddest beasts around. With the success of Kong: Skull Island, the buzz around Legendary’s MonsterVerse grew over night. Film buffs and kaiju fans have both Pacific Rim, and Godzilla sequels, along with the grand finale of King Kong vs. Godzilla to look forward to.

3pm
Stranger Things
It would be STRANGE if you DIDN’T like this show. It’s definitely a minor obsession (bordering on major) for us. We can’t wait until this Halloween to see what new monsters come spewing from the Upside Down. Cast and creators will be on hand to see if Eleven returns, will there be justice for Barb, and what’s the deal with those waffles????
Hall H

6pm
Bold Voice of Contemporary Horror
Nooooooow we’re talking–Love The Witch? The Invitation? The Babadook? It Follows? You’re Next? The Greasy Strangler? The Autopsy of Jane Doe? Some of the most knowledgeable and influential voices in horror today discuss the state of indie horror film and give a sneak peek at the best to come this year, with exclusive footage from Sundance, SXSW, and Tribeca standouts. This is the place to come to find out which upcoming horror flicks should be on your must-see list. Panelists include Elijah Wood (Spectrevision), Mette Marie Kongsved (XYZ Films), Aaron Moorhead and Justin Benson (The Endless—Tribeca 2017 premiere, Spring), Mickey Keataing (Psychopaths—Tribeca 2017 premiere, Darling), Marianna Palka (Bitch—Sundance 2017 premiere), and more. Moderated by Jen Yamato of the LA Times.

6:45
X-Files: A Conversation between David Duchovny and Dirk Maggs
Supernatural fandom owes such a huge debt to the original monster hungers, Fox and Scully and the out-of-this world wildness of THE X-FILES!!!! Liquefying aliens. Hissing creatures. Humming spacecraft. This is the otherworldly soundscape of The X-Files: Cold Cases -an Audible original drama that reunites David Duchovny, Gillian Anderson, and a cast of familiar voices from the iconic series. Duchovny and Cold Cases producer Dirk Maggs talk about revisiting the rich, sonic tapestry of the X-Files universe, what it means to tell more of Mulder and Scully’s story, and how fans can join the duo’s investigations and experience them like never before by putting on a pair of headphones. Fans may even find out what’s canon and what’s not.

9:30pm
SYFY’s Blooddrive
Supernatural never shirks when it comes to blood….Lube up for an exclusive look at the next episode before it’s unleashed onto the public. SYFY’s Blood Drive is a twisted, grindhouse-infected series that features the maximum amount of carnage allowed on cable television. In this race to the death, the drivers are fueled by mayhem and the cars are fueled by . . . human blood!

10:30 am
Supernatural
This is it–the biggest, best, and most enjoyable panel on the Supernatural Fan’s calendar–Sunday in Hall H at San Diego Comic-Con! Series stars and executive producers answer questions about the shocking events in last season’s intense two-part finale and preview what’s in store for lucky season 13. Fans will also be treated to an exclusive video presentation featuring series highlights of your favorite guys from Kansas and maybe a surprise or two! The 13th season of Supernatural will return to Thursdays this fall in its new 8/7c time slot on The CW. The series is produced by Kripke Enterprises Inc. in association with Warner Bros. Television.

Noon
Buffy 20 years
If you’re still up for monster-slaying after the Supernatural panel, take a walk on over to this monumental celebration. Buffy is DEFINITELY one of the predecessors of Dean and Sam–same type of humor and tone. The authors of the upcoming oral history Slayers & Vampires from Tor Books about Buffy the Vampire Slayer, Edward Gross and Mark A. Altman (co-authors of The Fifty-Year Mission) reopen the Hellmouth and look back at the secret history of the slayer who saved the world a lot, in honor of the show’s 20th anniversary. They will also look at what the future might hold for slayage in the 21st century and revisit the underappreciated genius of Angel and the Buffys that never were, featuring some surprise guests.

If the panels don’t grab your attention, then head outside for a HUGE number of off-sites. Check back here all week long as this list will be constantly updated!

But here are a few that we think Supernatural Fans might appreciate: