San Diego Comic-Con, the grand-daddy of comic conventions, is less than three months away, which means one of two things: 1) You’re on track to the best frakkin week of your year, or 2). You’re frakked. Sorry to put so bluntly, but a butt-load of preparation and work goes into Comic-Con. Here at Con Guy, we put together a Survival Guide: The 10 Things You Need To Know To Save Your @$$. Watch the show here (you’ll laugh, we promise). Also, you can read the complete article after the video. [Note: Special thanks to the artist of the Supernatural art: You can find it here.] 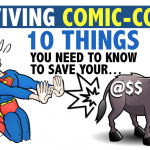 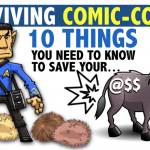 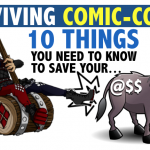 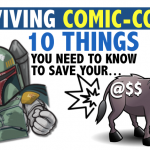 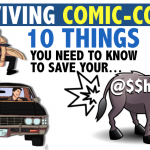 SURVIVORS GUIDE: 10 THINGS YOU NEED TO KNOW TO SAVE YOUR @$$

TRANSPORTATION: Depending on where you stay during the convention, parking is a MAJOR headache. But you have some options:

HOTELS/SLEEPING: Hotelpocalypse 2016 (the Hotel Sale) has come and gone. All downtown hotels are taken, but there are plenty of rooms outside of downtown, such as Mission Valley, Coronado, and up north of the city. Even thought the hotel sale is done, many of the rooms will be released a little later, so be paying attention to the Comic Con Hotel Room site.

PLAN YOUR DAY: Grab the Program Guide and circle your choices of panels, signings, and events, because Comic-con is not a lazy-man’s game. Wandering around is fun, but if you want to make sure you get the most out of your Con, have a plan A, a plan B, and a plan C for each day, each hour.

EATING: The food at the Convention Center is expensive and soaked in grease. Feel free to clog your arteries and empty your wallets. OR, pack some healthy snacks, bring water, and plan for meals outside the convention center. Check out these two Downtown San Diego Restaurant Guides:

KEEP YOUR PHONE/IPAD CHARGED: If you’re phone dies, you’re screwed. Why? Because that’s how you keep up with your group-members. That’s how you follow the twitter feeds that keep you informed of the up-to-date changes. That’s how you sign up for special parties and events. That’s how you take the photos of all the awesome Cosplay. Here are some tips:

OFFSITES / OUTSIDE EVENTS / PARTIES (on overview): This is a BIG topic for many convention-goers, and we’re going to dive into this extensively as the weeks go by, but just know this: You won’t be invited to most parties. Get over it, because there are some parties you CAN go to. Perhaps one of the best resources for seeing a list of the outside events is the blog Outside Comic Con. They may not get you into all the parties, but they’re the best at listing all the events that are happening outside the convention center all over downtown San Diego. Here are a few: