Han is pissed. And so are thousands of the rest of us. This whole “cutting in line” is a complete frak-up that needs to stop. Not just in San Diego, but at all the Cons.

We don’t personally camp out in line, but the stories of people waiting overnight just to be bumped from their place in line because someone else “held a space” for 25 of their closest friends is just plain ridiculous, and the Cons need to clamp down….heck, throw out the frequent abusers. The Hall-H wristbands in San Diego were a step in the right direction. But people were selling the wristbands (losers!) and the official distribution seemed waaaaay too slow and uneven. I’d actually advocate for ELIMINATING camping out completely, although I’d probably get pushback from all those folks who use the Hall-H line as an alternative to the super-inflated hotel room costs. (another topic for another time).

Camping out is bad enough, but it’s even worse when you put in the effort only to be thwarted by inconsiderate morons. According the the “official” rules at SDCC, you can only hold 5 spots in line. So a thousand folks in front of you can potentially become 5,000 people by morning. Ugh! Just stay in bed and watch the replay.

So, who’s with me? Let’s #StopLineCuttingAtCons and be a bit more considerate. Han definitely shot first, and his trigger finger is getting itchy….don’t make him use it.

SPECIAL NOTE: STOP THE SELLING OF SPOTS IN LINE

A special report on Fox 5 in San Diego told about how one “industrious” company is trying to become–what they call–the Uber of line-saving. You download the app and pay for someone to hold your place in line. For crying out loud! Let’s kill this effort before it gets any traction. NO PAID LINE SAVING. Kill it now.
See the full story here. 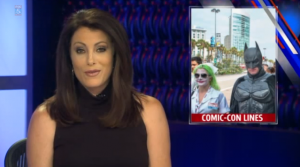 Here’s what people are saying about line-cutting and the horrors of the Hall H line. 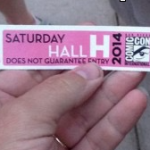 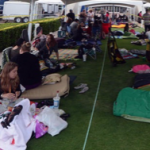