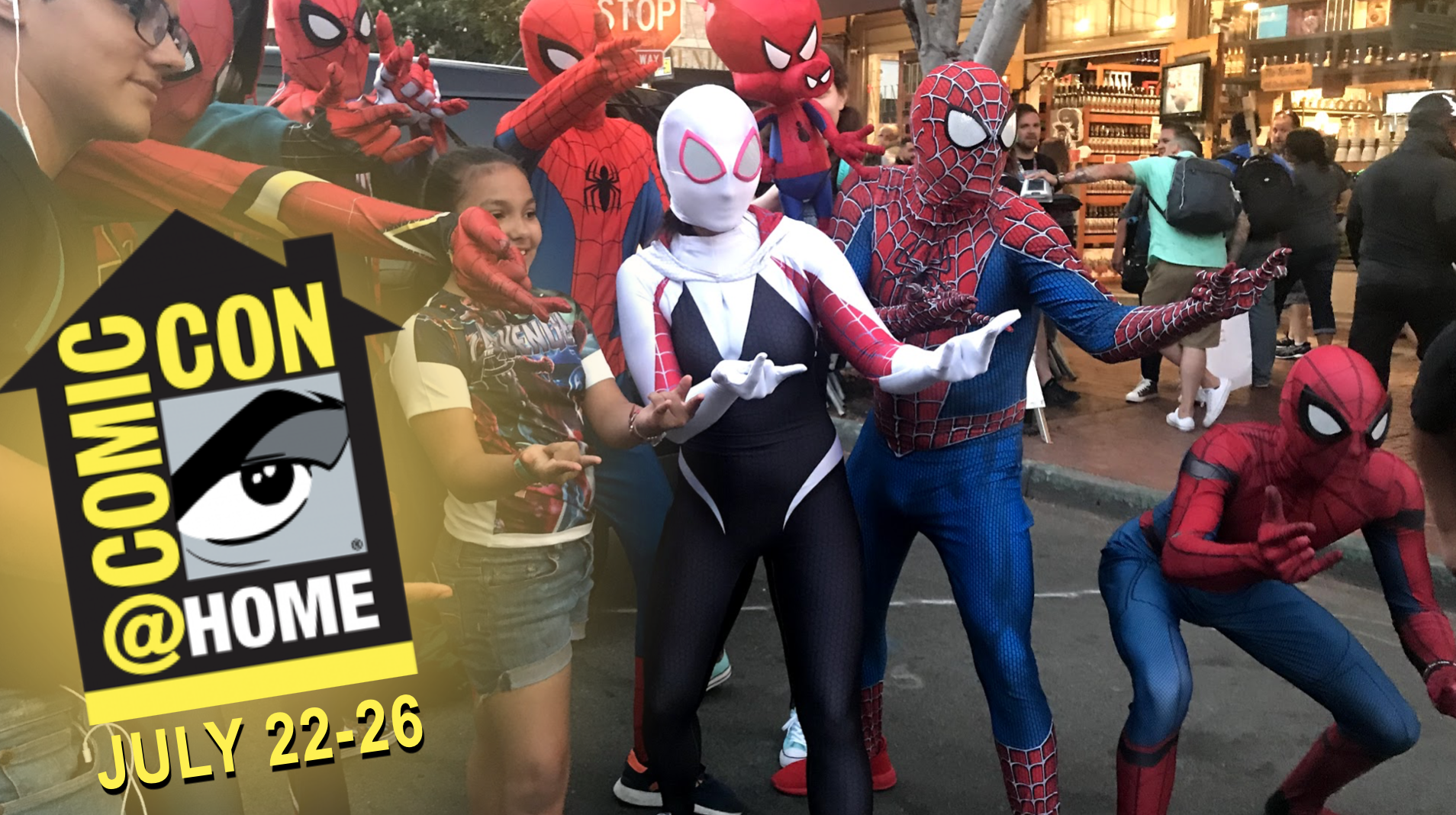 As the world slowly wakes back up, we’re faced with the first summer without a physical San Diego Comic-Con in 50 years! True, there are much, much bigger things to get upset about, and we fully recognize the real struggles happening right now. But the fact that we won’t be seeing the inside of the San Diego Convention Center this July still hits us right in the stomach… and I know there are thousands who feel the same way.

That said, the organizers are making sure we’ll still have some Comic-Con love in our lives this July, that’s because they’re hosting COMIC-CON@HOME, a virtual, online convention with “an online Exhibit Hall complete with everyone’s favorite exhibitors offering promotions, specials, and limited-edition products unique to the celebration. As well, Comic-Con@Home promises exclusive panels and presentations about comics, gaming, television, film, and a wide variety of topics from publishers, studios, and more. As if that weren’t enough, Comic-Con@Home will also have a Masquerade, gaming, and many other activities in which fans can participate from their own homes.”

And we here at THE CON GUY are excited to announce that we will be hosting a star-packed panel during the Comic-Con@Home convention! More info on that when we firm up the guests.

As many fans know, the organizers tried to pull together the same type of online experience once the WonderCon event was cancelled… and even though it may not have been as robust as hoped for, it still provided quite a few events, cosplay, and tons of panels! (THE CON GUYS hosted the POWER RANGERS Virtual Panel, and we participated in a second panel, the ever-popular FULL-TIME CREATIVE CAREER on a PART-TIME SCHEDULE.) To be fair, though, organizers weren’t expecting the coronavirus to move in so quickly and close all conventions and events, so their Wondercon@Home effort was as good as it could be on such a short notice. If you haven’t check it out yet, you should!

“Although Comic-Con@Home will provide badges for fans to print and wear proudly, all aspects of the initiative are free and there are no limits to how many can attend. ‘For the first time in our 50-year history, we are happy to welcome virtually anyone from around the globe,’ said SDCC spokesperson David Glanzer. ‘Though stay-at-home conditions make this a very difficult time, we see this as an opportunity to spread some joy and strengthen our sense of community.’ Comic-Con@Home will be held on the same dates as the previously canceled Comic-Con, July 22-26, 2020, and online attendees are encouraged to use the official #ComicConAtHome hashtag to be included in the virtual activities. Organizers and participating entities will begin providing additional details in announcements leading up to the event. Interested fans are encouraged to check Toucan, the official Comic-Con and WonderCon blog, SDCC’s website and social channels, and the official channels of their favorite pop culture creators in the weeks to come.

Okay, okay, we know…. this sure ain’t the same as going to San Diego. True. But it’s the next best thing, and besides… now you can invite ALL your friends, you don’t have to camp out (unless you want to), and you’ll save a thousand bucks on the hotel room costs. AND you don’t have to pig out on crappy nachos and cheese wiz… (full confession: I actually don’t mind those nachos).

We’ll definitely miss the convention, we’ll miss the crowds, we’ll miss the exciting Hall H reveals, but most of all we’ll miss seeing all of you…. there’s something about downtown San Diego that just fills us all with hope. All the Geeks and Nerds are happy, free, friendly, and in their own utopian world while at Comic-Con…. let’s try to keep that feeling going during Comic-Con@home… especially during these turbulent times when people are showing extreme cruelty to one another. Let’s be that light the world needs right now…. and for goodness sake—let’s all go to Comic-Con! We’ll see you guys in July!