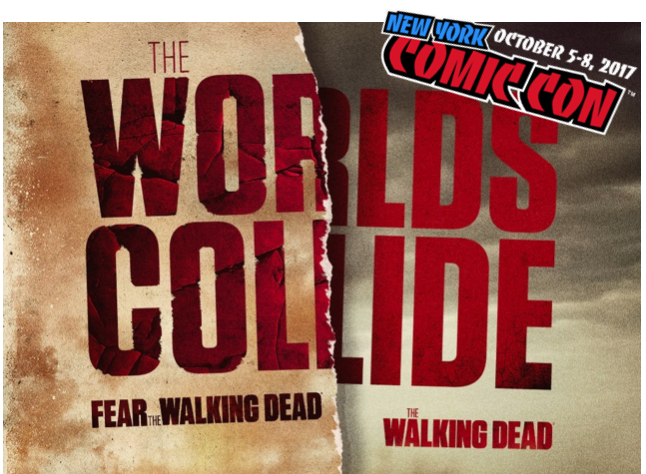 It’s the news that fans of the DEAD shows have been waiting for since Fear The Walking Dead first lurched its way onto AMC’s calendar. Although “Fear” has yet to hit the dramatic (and neilsen number) highs of the mothership series, news like this might be a much-needed adrenaline boost for the spin-off. According to Deadline:

“The worlds of The Walking Dead and spinoff Fear The Walking Dead are finally going to cross paths. Right at the beginning of today’s New York Comic-Con TWDpanel it was revealed that there is going to be a crossover between the two AMCshows based on the comics created by Robert Kirkman.”

Watch @hardwick introduce the cast and producers of @TheWalkingDead at #NYCC pic.twitter.com/PGXKv5rAqL

Nicotero promised that the upcoming season 8 (Wow! Eight season!) will be a big payoff to the extended and excruciating (some–including us–would say infuriating) season 7 malaise. We are SO over the dark, depressing slog of season 7. Season is called “All Out War.” Bring on Season 8! We’re ready for War!