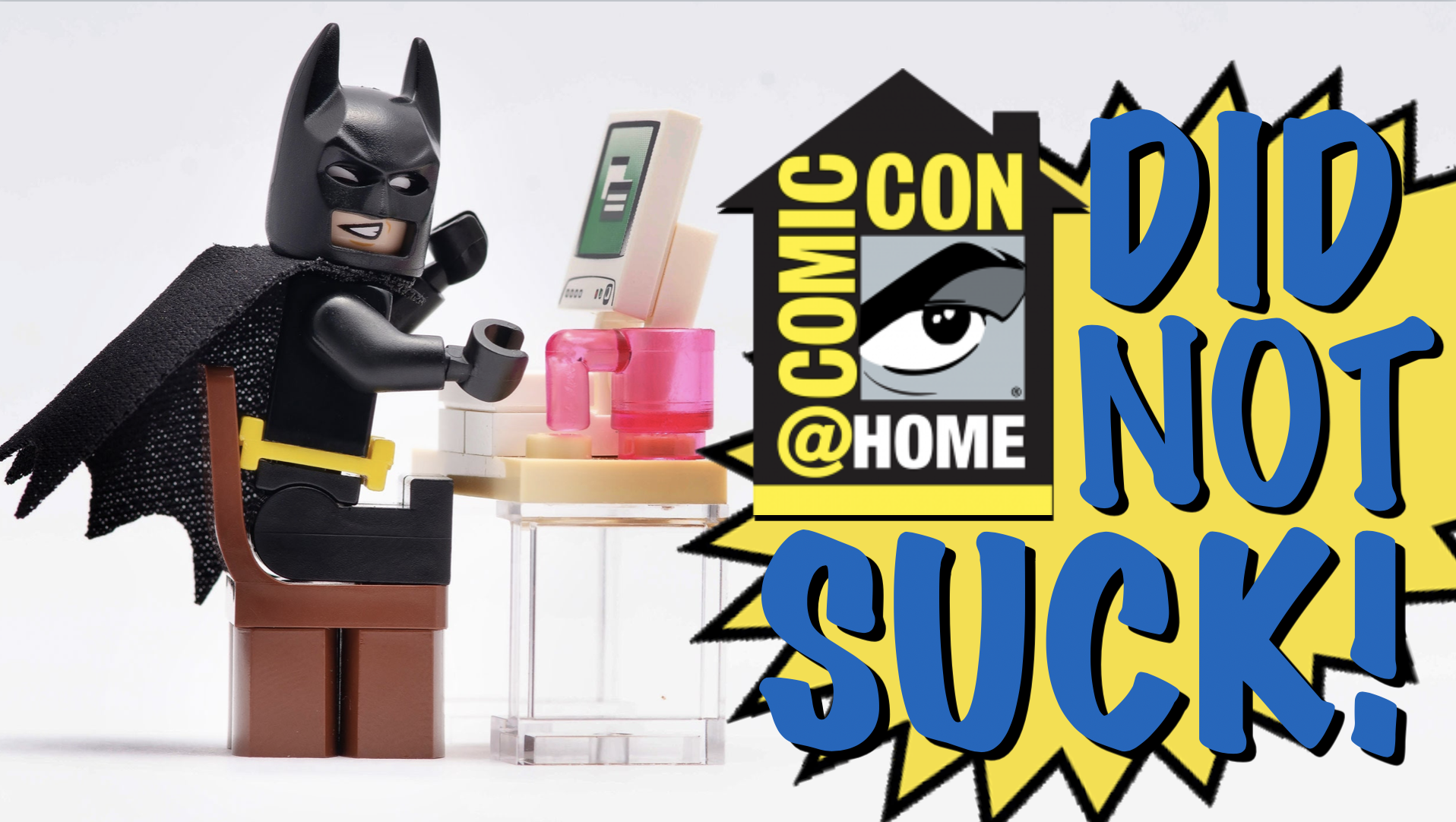 San Diego Comic-Con is the world’s most important pop-culture convention, and this year it had to do things completely differently—which, according to Variety and Screenrant, was a disaster. We think they’re wrong, and here’s why.

As most folks know, there’s this little thing called COVID-19 that’s been giving the world a sucker-punch for the past few months, and Comic-Con is no different. Because of local and federal guidelines, Comic-Con International was not able to hold their physical event this year, but instead, they optioned to move the whole thing online into what was called Comic-Con@Home. They had over 350 panels, a full digital convention floor, tons of exclusives, offsites, cosplay competitions, and a whole lot more. In short, they had the most dynamic and robust online fan convention of the year….or of any year. For a fuller grasp of the weekend’s events, check out our COMIC-CON@HOME AFTERSHOW, right here: (and yes, we went to downtown San Diego and had a blast!).

WHAT MEDIA OUTLETS ARE SAYING

Okay, now here’s where things get persnickety…. a couple media outlets are having less-then-stellar things to say about Comic-Con@Home. Here’s a sample:

Variety: Why Comic-Con at Home Was a Bust.
“It was meant to replace San Diego Comic-Con, the massive annual fan gathering that was forced to cancel due to the COVID-19 pandemic. Despite A-list panels for “The Walking Dead,” the Star Trek Universe, and two Keanu Reeves movies, Comic-Con@Home cast a pale shadow in comparison to Comic-Con of recent years — perhaps the starkest example yet of what we lose when we lose the live experience … The lack of panels for Marvel Studios, Lucasfilm, and DC Films — events which have become virtually synonymous with Comic-Con — certainly didn’t help boost overall interest in Comic-Con@Home.”

Screenrant: Comic-Con@Home Turned Out To Be A Massive Failure
“The online convention promised fans more than 350 panels — including high profile events showcasing The Walking Dead, Star Trek Discovery, and high-profile actors like Keanu Reeves. There were also virtual artists and vendors alleys, exclusive merch, various contests, competitions and more. But even with so many pop culture fans starving for content over the last few months, Comic-Com@Home wasn’t enough to scratch that itch, considering the social media engagement numbers from this year’s undertaking  compared to last year’s in-person event were staggeringly low. According to a report from Variety, based off of numbers from ListenFirst, a social media analytics firm, tweets mentioning Comic-Con@Home fell a mind-boggling 95% from last year’s in-person counterpart.”

One line from Screenrant sums up the main point of these two articles: “Despite being free and accessible from a fan’s couch, Comic-Con@Home proved to be a complete bomb compared to last year’s in-person event.”

So basically, both articles tried to make the point that since Comic-Con@Home didn’t deliver the same experience (and social media engagement numbers) as the physical conventions that Comic-Con usually holds each year, that made it a “disaster” and a “bust.” I call B.S.

OF COURSE it could never size up to last year’s convention…. There’s ABSOLUTELY no replacing the excitement that is San Diego Comic-Con. We’ve been to dozens of conventions all over the country, and we can say with conviction that San Diego’s Convention has an excitement level that is unique and epic and irreplaceable…. So yes, we agree with both articles on one fact: Comic-Con is better in person. Period. I’m not sure many people would argue with that. But where we must take issue with them is stating that Comic-Con@Home was a failure because it couldn’t match the in-person experience. That’s just plain dumb. That’s like saying, “Winning 20 million dollars is so much better than watching the Beverly Hillbillies TV show, so therefore, the Beverly Hillbillies sucks.” They’re two different things altogether and can’t be considered to be in the same category. Therefore, it’s just as dumb to say, “Comic-Con is so much better than Comic-Con@Home, therefore Comic-Con@home sucks.” It’s the kind of statement you’d expect from a toddler in a sandbox.

COMIC-CON@HOME WAS THE BEST ONLINE CON YET

Many of us have probably taken part in at least a few online ‘panels’ or conventions or other virtual experiences because of the COVID shutdown…. Although we appreciate the opportunity to tune in to some cool panels online, ‘Zoom fatigue’ is a real thing and many of the online conventions haven’t really delivered much of an experience…. Comic-Con@Home, though, was different. Instead of just a long, steady stream of panels, Comic-Con@Home delivered a huge variety of panels at various times throughout the day, in much the same way you’d expect a convention to operate. And unlike the physical Comic-Con, where you have to choose between the panels you want to see, for Comic-Con@Home, the panels are still up and you can watch them all.

Fan tables were listed. As was each artist in Artist Alley, with a link to their site where artwork was available. And because so much was going on, a number of sites helped to host panels and merchandise sales, including IGN’s collection of panels and events, Amazon’s virtual con, virtual portfolio review sessions, the Eisner Awards presentation, and even an online Masquerade hosted on Tumblr. There was even a free downloadable Souvenir Book available to everyone! And for those who LIVE for the offsites, those were there too, such as the FX Unlocked Event, or the Adult Swim Virtual Con.

In the end, was Comic-Con@Home as good an experience at the previous physical conventions? No, not even close. But there’s no way it could be. The question should be, In this age of only being able to “attend” events in a virtual manner, was Comic-Con@Home a BLESSING or a BUST? We here at the Con Guy thought it was the best online experience that 2020 has yet given us, and we ate it up. We even produced our own POWER RANGERS panel! (You should watch it!). Aaaand, Jim and Cheeseman were participants on the panel: How to have a full time career on a part-time schedule…. also a great view.

There’s still time to check out the more than 350 panels ranging from Movies, to TV, to comic books, to gaming — everything you’d expect from a top-notch convention like Comic-Con. Enjoy it. Participate. Just don’t hate. And be looking forward to the day when we can all be together again…. hopefully that day will be 2021. Until then, ENJOY Comic-Con@Home!