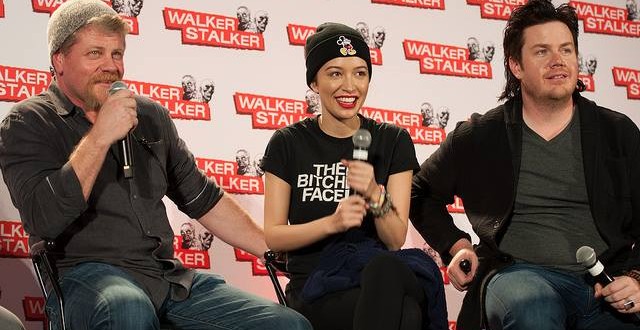 What’s going on with the Walker Stalker & Fan Fest conventions? They seem to have imploded, disintegrating into chaos, no-shows, and a whole lot of confusion. It seems like not long ago that all the stars of THE WALKING DEAD and FEAR THE WALKING DEAD were regulars at these conventions, showing up in force to meet the fans, sign autographs (at sky-high prices), and keep the whole fandom-convention engine running. You could find a Walker Stalker in just about any region — including London!

Let me say here, right up front, that I am a long-time die-hard fan of The Walking Dead. Always have been, probably always will be. And I remember the first time I encountered Walker Stalker was at San Diego Comic-Con a number of years ago when it took over one of the lower portions of Petco Park. That was during the hey-day of THE WALKING DEAD, back when the show was pulling in giant audience numbers, up over 20 million viewers per week.

But apparently, things went downhill fast in late 2018. Gold tickets/photo combos that were sold suddenly changed conditions without notice. Refunds didn’t come and bills didn’t get paid — including fees to actors and talent — and controversies started popping up all over. According to the Atlanta Journal-Constitution, “The Tennessee Attorney General’s office is investigating Walker Stalker LLC and FanFest Events LLC after major problems emerged the past 18 months regarding cancelled conventions, ballooning debts and unpaid refunds.”

According to WHNT TV News: The Portland, Oregon, convention was abruptly canceled, and consumers were initially promised their refunds would be processed within five to seven days. The refunds never came. Instead, the owner, James Frazier began to promote the next scheduled Walker Stalker con in Phoenix, AR. He offered ‘deals’ like buy-one get-one free event tickets or upgrades for photo opportunities with stars. Those began failing as well, and the cycle continued. Fans in twenty-one states and six countries have lost thousands in ticket, travel and lodging expenses to attend ‘sold out’ events only to see them canceled or postponed days before the event with no refund in sight.”

According to Rostercon.com, here’s a list of postponed or canceled events from Walker Stalker, which also runs Fan Fest (click image to enlarge): 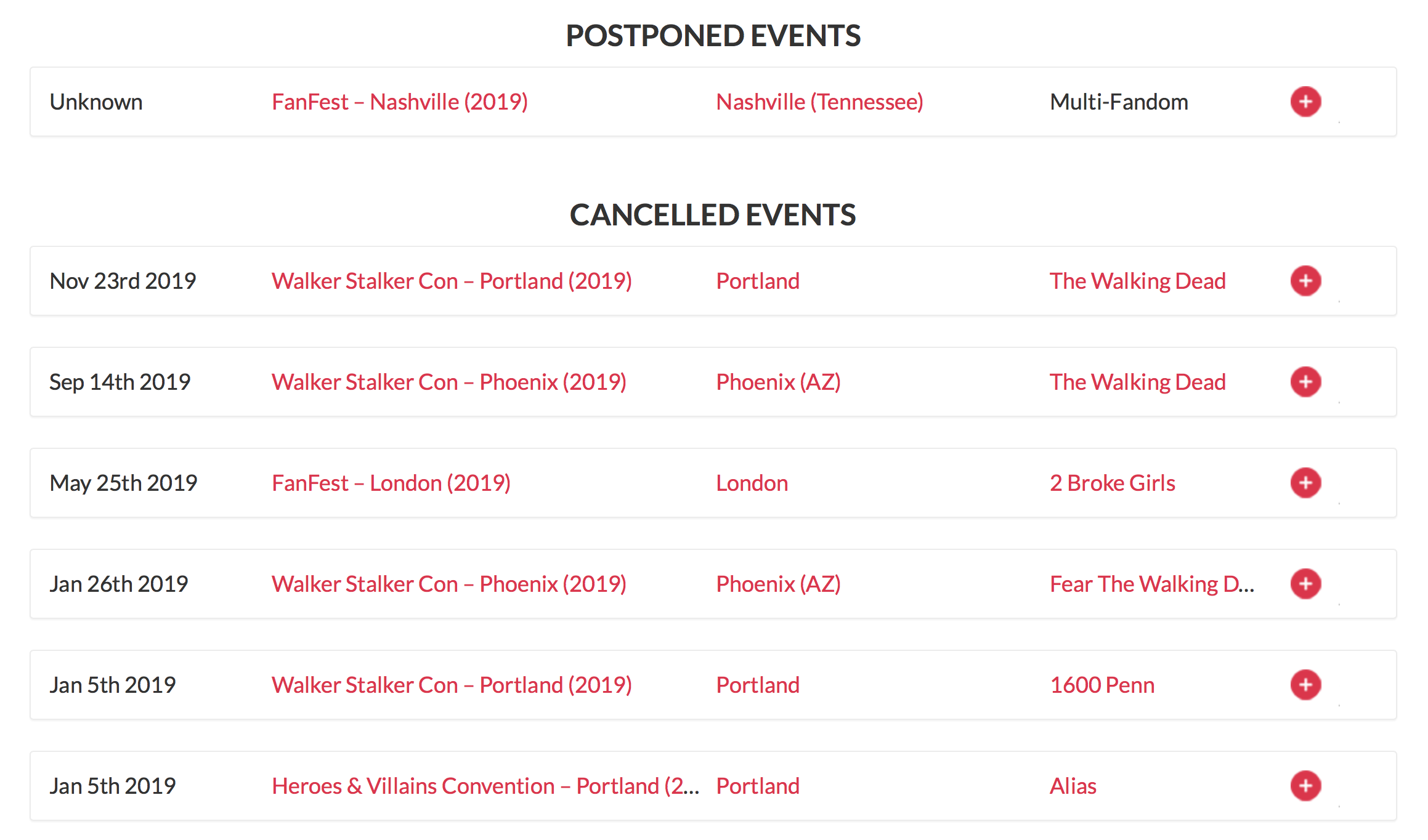 Walker Stalker released a statement that said: “Walker Stalker has been working with the State Attorney’s Office for a couple of months to show what refunds have been completed and still need to be completed. We have been completely transparent with them, sharing the information they have requested and need in order to understand where the company’s financial position stands and where it is going. We are sorry and hate that anyone is due anything outstanding from our events. Our goal is to resolve all of the outstanding refunds as quickly as possible.”

There’s a statement on the Walker Stalker website that says: “Ticket sales have been temporarily paused.  We will resume sales in the near future.”

Apparently, the company started adding up debt amid lower attendance numbers at its conventions. These lower numbers came as the TV show The Walking Dead has, according to some reports, lost over two-thirds of its viewers in recent years (ouch!). Then talent started canceling their appearances, apparently because of contract and non-payment problems. Here’s a couple tweets from Khary Payton, aka King Ezekiel on THE WALKING DEAD, from earlier this year.

This is good advise. If @WalkrStalkrCon had the means to pay these debts, I believe they would have done so by now. Good luck, everyone. I’m sorry you were taken advantage of. We all were. https://t.co/40WydVnQeX

The Atlanta version of the convention had so much bad press this year that Walker Stalker CEO James Frazier had to hire personal security guards because of the amount of death threats he received. “I’m going to take some time to decide if there will be a next year,” he wrote on social media. “I love making people happy. But this year has been grueling and no matter how much heart and effort I give, I can’t take another year of having every word, conversation, picture and move criticized and twisted.”

According to the AJC, “Walker Stalker LLC as of September 1 had $314,600 in financial trade payment debt, 86 percent of it past due more than 90 days. Frazier said it’s a loan and he has negotiated a new payment structure.The IRS also filed a tax lien against the company of $51,559 on May 14, which he said he’s worked out an installment plan.” 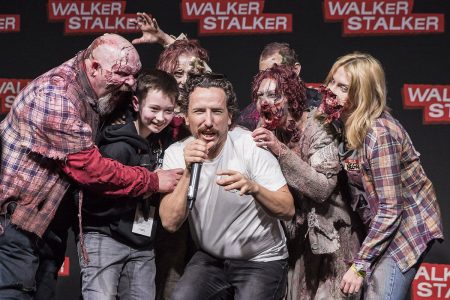 Not surprisingly, Frazier, who has been the CEO for the past six years, resigned three days after the end of a problematic Atlanta convention this year. Some are reporting that Walker Stalkers LLC is for sale, but not the Fan Fest brand. And, as of today, there are still plans to continue the Atlanta event for next year (but don’t quote us on that).

There are several reasons that might explain why Walker Stalker imploded like this. Maybe they expanded too fast. Maybe the fanbase for The Walking Dead shrunk faster than expected (C’mon, Dead Heads! We’re still here!)…. and let’s face it, sadly, it will never be the huge audience it once was. There’s also the very real possibility that the huge number of conventions might be cannibalizing each other. After all, we only have money for so many events per year. Maybe the tastes of audiences are changing.

And perhaps, sadly, it just came down to poor management of late. I mean, the Walker Stalker and Fan Fest events have been happening for a while, and they’ve had tons of talent/celebrity support, so obviously they were doing something right. It’s just the past year and half that things seemed to fall apart. Let’s hope that 2020 has better conventions ahead. Regardless, here’s what was posted on the Walker Stalker Facebook page earlier this year:

“When we created Fan Fest, it was because we knew, that in the long term, the world of The Walking Dead and the Arrowverse would not be around forever at the level of popularity that they were at their peaks AND we wanted to create access for fans from other genres to come and enjoy our events. Our company grew quickly and, with all companies, we’ve had our share of growing pains. During a critical point at the start of this year, the company had to decide what its long-term vision was if it were to succeed. That decision was made. And with that decision, it was best to cut certain events, cut ties with certain entities, and restructure the company to bring back some of the things that made the company great when it started. We realize that in the short-term, these decisions have a negative impact on people. But if these decisions were not made, this company would not be here just four months later. So, we’ve torn off the band-aid and everything you are seeing and feeling, well, quite frankly, sucks. Let’s get all of the hard and ugly stuff out of the way, and it’s possible there may be more hard decisions ahead too, but let’s focus on the things and the reasons why people enjoy our events to begin with.”

Okay, then… there it is.

3 thoughts on “ARE THE WALKER STALKER FAN-FEST CONVENTIONS DEAD? WHAT HAPPENED?”