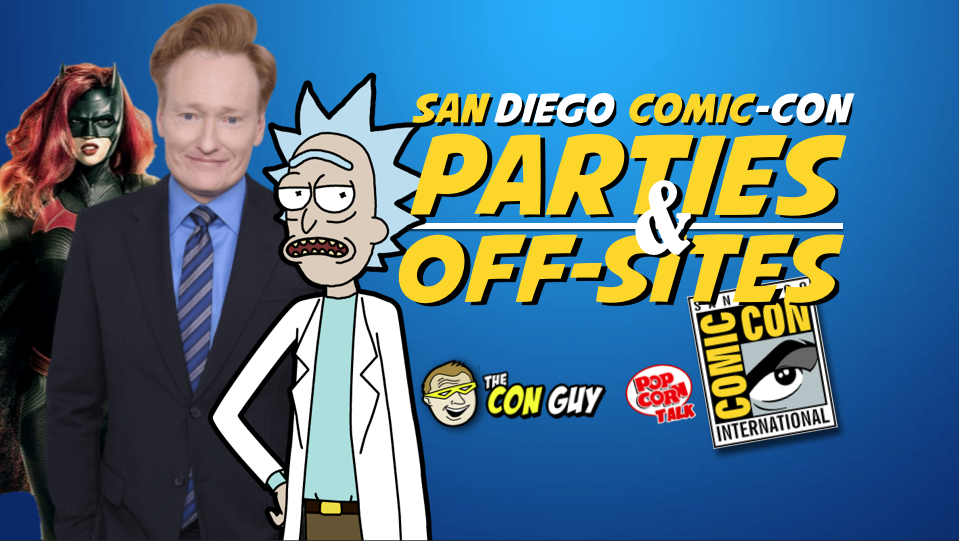 Happy Comic-Con week! This is it — the week the entire geek (and pop culture) universe shifts on its axis and leans toward San Diego. This week on THE CON GUY SHOW, bring you all the information about the best parties and off-sites. And it’s not just for San Diego Comic-Con badge-holders. Nope! If you weren’t able to score a badge, you can GHOST the Con by attending many these off-site activations and industry parties. Some require a badge, but most don’t. Watch right here for the lowdown and have an awesome week!

SDCC PARTIES (off-sites are listed below the parties)

Amazon Prime Video is headed to Comic-Con International in San Diego in a big way with a massive immersive fan experience that showcases three shows – The Boys, The Expanse, and Carnival Row – as well as a packed slate of panels, parties, and a free fan premiere screening. Cast and creators of The Boys will join fans for an exclusive two-episode sneak preview on Friday (July 19) at 7 p.m. at the Amazon Prime Video Experience at Comic-Con, which is on the corner of MLK and 1st in San Diego. Across from the convention, the stand-alone Amazon Prime Video Experience will celebrate two new Amazon Original series The Boys and Carnival Row, as well as the upcoming fourth season of The Expanse. The immersive 60,000 square-foot activation is an elaborate, splashy showcase, which features a 40-foot tower with LED screens playing scenes from the spotlight shows. It will be open from Thursday, July 18 through Sunday, July 21 (with a special preview day open to press on Wednesday, July 17). Fans will receive collectible gold and silver coins, which they can use to further explore the activation experience. Among the enticements: Carl’s Jr. burgers and a professional portrait photography studio set-up for cosplayers.

The Dragon Ball 2019 World Adventure opens on Wednesday July 17th at an expansive installation on the Marriott Marina Terrace at the Marriot Marquis San Diego. The tour will continue throughout San Diego from July 18th to July 21st and will be open daily from 10:00 AM to 6:00 PM. Fans will be able to dive into the world of Dragon Ball with an expansive collection of multi-faceted interactive installations. Fans will also be able to capture their visit to 2019 Dragon Ball World Adventure with a unique and shareable complimentary memento via the Dragon Ball Animated GIF Photo Booth. If that wasn’t enough, there will also be collectibles and exclusive merchandise on hand for the more hardcore fans. But wait, there’s even more! Fans can collect stickers at each attraction inside the Dragon Ball World Adventure. Stickers may be redeemed for free premiums including Dragon Ball wristbands, posters, lanyards, stickers, fans and Saiyan Hair Set headbands.

The Orville Experience offsite museum will have props, costumes, models and more on Friday and Saturday from 10 a.m. – 8 p.m. #TheOrvilleExperience.

NBC Offsites: Three of NBC’s biggest shows are taking over the Gaslamp District. “Brooklyn Nine-Nine,” “The Good Place,” and “Superstore,” will have huge offsite experiences. The pop-up precinct will be located in front of the Tin Fish Restaurant on Sixth Avenue Thursday – Sunday at various times. You can pre-register for tickets at nbcsdcc.com.

The inaugural Fox Fan Fair, which will spread across 24,000 square feet and two activation sites. The eye-catching branding hub will feature free carnival games, super-sized lawn games, an ice cream truck, and a hulking 70-foot Ferris wheel that provides the event’s spinning signature centerpiece. The amusement rides and carnival games are themed to The Simpsons, Bob’s Burgers, Family Guy, as well as   the upcoming animated series Bless the Harts. Fox also plans to distribute more than 83,000 limited-edition items (collectible buttons, lanyards, posters, etc.) over the course of the long weekend. The Fox Fan Fair will be at 200 West Island Avenue, across from the Children’s Museum. Thur-Sun. All free.

The Pennyworth experience begins with a challenge and fans who figure out the correct password will gain access to the Velvet Rope (a high-society London lounge filled with gambling, drag and cabaret performances, live music from the era), as well as a library that leads to an eerie poetry reading in the posh hidden headquarters of the mysterious Raven Society. The final stop is the Raven Society’s dank dungeon where the membership’s darker deeds present themselves. The Pennyworth experience will be located inside the Oxford Social Club at the Pendry San Diego Hotel (435 Fifth Ave, San Diego, 92101). The experience will be open to the public from 11am-5 pm on July 18. Those hours expand to 10am-7pm on July 19th and July 20th.

PETCO Interactive Zone. Will include a Ripley’s Believe it or Not Car Lot. Impractical Jokers Museum on Wheels. The Interactive Zone brings together several pop culture booths (Sharkzilla!) and studios for games, food, and fun for fans; No SDCC badge needed.

Adult Swim On the Green: Adult Swim brings back its annual carnival on the green outside on the lawn behind the convention center. Rick and Morty’s Rickflector will be there to trans-portal your melted minds into the animated world of Rick Sanchez. Toast your buns on the mechanical hot dog, stay at night for special late-night presentations, and more. There’s a link to sign, but all I get are error messages.

FX Fearless Forum. Anchored by American Horror Story: 1984 — Face the Darkness activation. The immersive excursion features classic tropes of slasher horror, augmented by night vision goggles to turn up the terror. The installation will also feature activations for It’s Always Sunny in Philadelphia, Archer and What We Do in the Shadows. 12-6 p.m. Thursday; 10 a.m.-6 p.m Friday and Saturday; and 10 a.m.-2 p.m. Sunday at the space adjacent to the Convention Center. Pre-register for an RFID badge at FXSDCC.com in advance.
The Good Place diner. Visit the Interdimensional Hole of Pancakes as seen on the NBC comedy. Enjoy themed meals and feel what it’s like for Michael to be truly powerless. Thursday-Sunday at Maryjane’s Diner at the Hard Rock Hotel.

HBO’s Watchmen activation.  (Sixth Ave & Island Ave/Petco Park Home Plate Gate): Experience to world of the “Watchmen” with HBO’s interactive, in-world activation. Fans will receive custom pins and explore the Watchmen world through an augmented reality experience. The activation will be at both Sixth Ave. and Island Ave. and at Petco Park’s Home Plate Gate; No SDCC badge needed.

Superstore’s Cloud 9 pop-up. Beat the heat in the faux department store, located in the main lobby of the Hard Rock Hotel. Thursday-Sunday.

Kitties and Coffee for Comic-Con (472 Third Ave, San Diego): Book your time at The Cat Cafe and get a 45-minute session with adoptable cats from The Rescue House and a food or drink item for $20 during SDCC. Book a visit: https://bit.ly/2FB4hpn; No SDCC badge needed.

Nerdvania returns to Atomic in downtown San Diego from Wednesday through Sunday of Comic-Con. Located on the 2nd floor, in the Tiki room of Atomic, the shop will have Funko Pops, toys, comics, and other colelctibles. The venue is all ages until 9pm.

Pokémon Detective Pikachu experience. Experience the magic of Ryme City in an immersive walkthrough pop-up based on the hit film Pokémon Detective Pikachu. Guests will be able to explore the neon cityscape, Ryme City marketplace, film prop displays, an infinity room and more. Fans can win prizes while having the opportunity to take photos with multiple characters from the film including Detective Pikachu himself! The offsite will be located outside of the Omni Hotel and open Wednesday 5PM – 7PM, and Thursday – Sunday, 10AM – 7PM.

Super7 Peanuts Grief Gift Shop (Friday – Sunday). Return to the good ol’ days of Peanuts at the exclusive Good Grief, a Super7 x Peanuts Gift Shop, showcased at the Super7 San Diego store (701 Eighth Ave). This pop-up will take place Friday through Sunday and feature products from Super7’s collaboration with the beloved Peanuts , which focuses on the more stylized 1950’s and 60’s characters from the launch of the comic strip.

Comikaze Presents: Artists Alley III. The 3rd annual Comikaze Liberty Station Artists Alley, offering space to any artist unable to get a booth at Comic-Con and any Publisher who would like to have a pop-up space to meet their adoring but non-badge wielding fans. Comikaze is a 15-20 minute ride from downtown San Diego, located in beautiful Liberty Station on Pt. Loma.

Stargate Command at Legion M. MGM’s Stargate Command will present a replica Stargate photo opportunity in the Theatre Box lobby for the whole weekend, and will give attendees a chance to spin the prize wheel for unique Stargate prizes, including mini-posters, pins, buttons, original SuperFan creations and more. Talent will be dropping by for autographs. The area will be open Thursday and Friday, 12PM – 5PM, and Saturday and Sunday, 10AM – 5PM. All gate travelers welcome!
.

Academy Award nominated composer David Newman conducts the San Diego Symphony performing the score he wrote for Galaxy Quest, while the film is shown on the big screen. Celebrating 20 years this year. Get tickets at SanDiegoSymphony.org.
.

Mavel I love you 300 Tour Kickoff: Calling all Avengers fans! Join Marvel Studios’ Avengers: Endgamedirectors Anthony and Joe Russo and special MCU guest(s) at the IMDboat as they celebrate the in-home release of the film. Costumed guests will be welcomed aboard to participate in a special Marvel Studios Cosplay photo with the Russo Brothers and their special guest(s). Saturday, July 20 at 1:15 – 2:15pm. General fans who arrive on-site will be gifted with a free ice cream courtesy of Ben & Jerry’s (while supplies last). Special guests from Marvel Studios and the MCU will visit nine U.S. cities — beginning in San Diego at Comic-Con International on July 20 and ending in Anaheim at D23 Expo 2019 on Aug. 25 — greeting and treating fans at each tour stop.

Walker Horde. AMC invites fans to dress as zombies for an official Walker Horde moment at Petco Park on July 20 (doors open at 9 AM). Attendees will help re-create a walker scene for a photo that will be part of an official marketing campaign for the 10th season of The Walking Dead.

Meet up with other Outlander fans outside the San Diego Bayfront hotel, near the wind chimes art, on Saturday, July 20, at 7:30. Outlander TV News will be handing out some swag. Keep up to date on their Facebook event page.

La Bodega Gallery hosts their annual SDCC-themed art show, and this year is Comic Book Art. The opening reception will be Saturday July 20th, from 5:00pm to 10:00pm. The event is free and open to all ages. Cosplay is encouraged! They have a call out for art now, you can find out more on their Facebook event page

Make sure to watch the show (above) for a complete break-down of the parties and off-sites…. Or, you can download and listen anytime at any of these locations…. we’re all over the place!