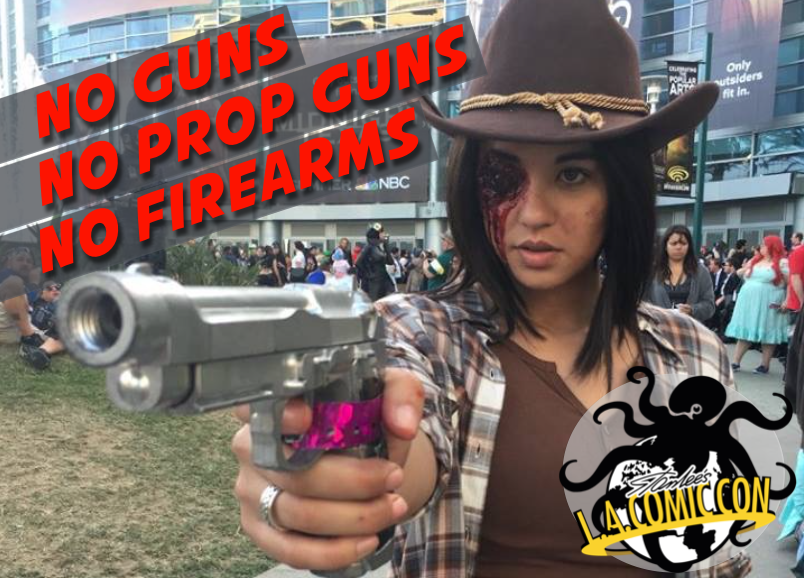 I guess it was just a matter of time — in the wake of the Vegas tragedy, and perhaps because of the fact that an idiot showed up at Phoenix Comic Con with a gun because he wanted to kill someone, prop weapons bans are going to become commonplace at fan conventions all across the country. Just this week, Stan Lee’s L.A. Comic Con announced a brand new policy. Here’s how it reads: 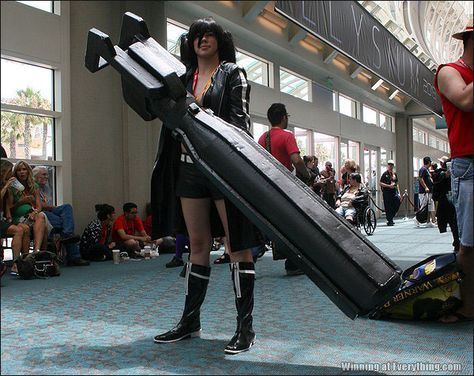 ~ PROP-GUNS: To be clear, props including, but not limited to those that resemble historical guns, science fiction guns, or fantasy guns. Simply put, if it looks like a GUN (and is NOT a banana or your finger), DON’T BRING IT!

#2. FUNCTIONAL WEAPONS will NOT be allowed at Stan Lee’s L.A. Comic Con under any circumstance. The following are specifically banned: 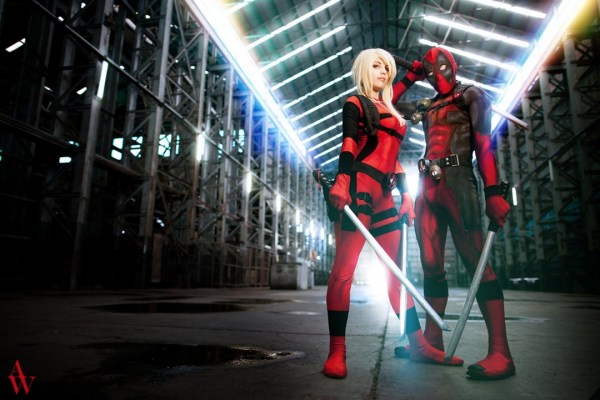 An Englishman In San Diego had this to say:

This is a significant moment in convention history: to have an event lay down such a hard line against cosplay weapons, to have cosplayers have to make a decision about what kind of costume or character they want to represent. When it comes to characters such as Captain America, The Winter Soldier, Punisher, G.I. Joe, HALO and the like, the weapon accoutrements that are indelibly linked to those will be literally stopped at the door. Full article here >>>

Tony Kim, at Crazy 4 Comic Con, had this to say:

Obviously, this is quite a damper on a cosplayer’s costume plans but we all have to adjust with the times. It’s unfortunate that a couple of deranged apples can potentially ruin the experience for us all. While necessary for the sake of security, I say we don’t let it ruin the fun for the rest of us. Our community has been so great to flex and see the positive in any situation. So while we won’t be toting blasters or gunblades, lets show the world that hate won’t prevail. Full article here >>>

We really think the proverbial $%!% is gonna hit the fan… but what can you do? I mean, we now get groped at airports and have to basically go through metal detectors wherever we go. When 100,000 fans show up and thousands of them have prop weapons, how can security keep an eye on them all? It wasn’t too long ago that we didn’t even think about this stuff, but now…. sucks. That’s the only way to describe it–sucky. This past summer, San Diego Comic Con sent cosplayers into a tizzy by changing the policy seemingly mid-conventin.

I’m still gonna have a blast (maybe “blast” is the wrong word?), but I hope someday that sanity can return. For crying out, prop weapons are as much a part of cosplay as Hall H is a part of San Diego, and as much as Stan Lee is a part of L.A. Comic Con. But like I said…. I get it. All it takes is one idiot with a gun sneaking in to REALLY cause trouble.

For an overall preview of Stan Lee’s L.A. Comic Con (minus the guns), check out our special video podcast… lots of great guests. Tons of fun: