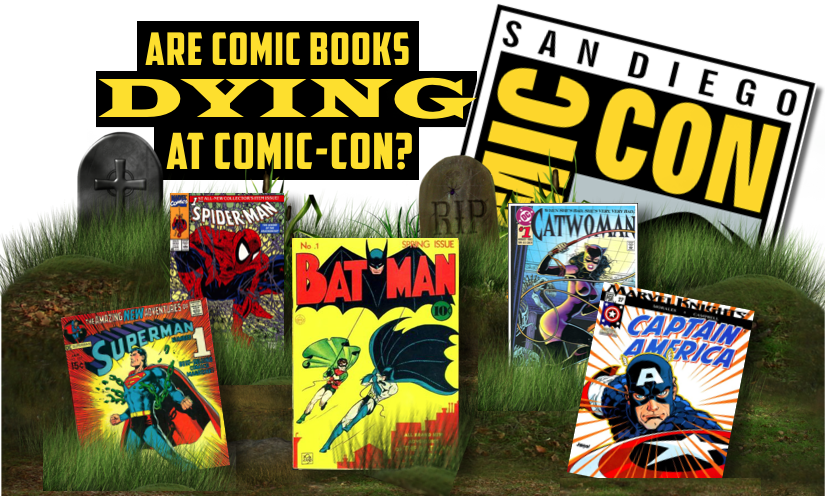 Yeah, this sucks. It seems like an age-old argument–doomsayers have been predicting the death of comic books at Comic-Con for some time now…. and although we don’t think comic books are dead in San Diego and other cons, they definitely seem to be inching toward intensive care… Things are changing at Comic-Con (San Diego and others), and it ain’t necessarily good for everyone (although, I’d argue, the crowds seem to indicate that SDCC is definitely doing something right!). Mile High Comics, a huge Comic Book seller who has been a mainstay on the convention floor at San Diego Comic-Con for 44 years is breaking up with the convention. And it ain’t a pretty breakup.

First, you can watch our discussion on our podcast — we include guest Tony Kim, whose editorial/article we reference below. GREAT discussion (at minute 32:00)

For those unfamiliar with Mile High Comics, or its owner Chuck Rozanski, check out this video from Chuck’s newsletter. Here, he walks us through all the preparations he makes to prepare for the annual trip to San Diego.

Chuck’s Mile High Comics booth has been a huge stop on the floor for all comic book fans…. you couldn’t miss it: It was always packed with tons of comics and even more fans. It was a comics oasis in the middle of an ever-changing convention. And I, for one, can say, that it was always one of my first stops on Preview Night and one of my last stops on Sunday. 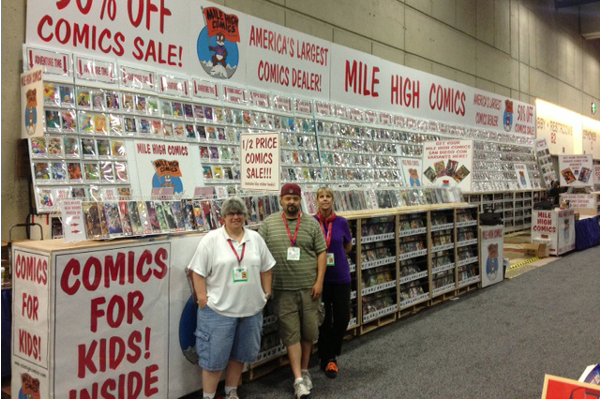 The Mile High Comics booth on the floor of San Diego Comic-Con is now a thing of the past.

But now that’s just sad history. Chuck notified everyone this past week in an emailed letter he sent out that Mile High Comics will not be back. Here’s a portion of that letter:

“To answer the numerous questions that we have been receiving of late, for the first time in 44 years, we will not be exhibiting at this year’s San Diego Comic-Con. I wish that this decision could have been otherwise, but circumstances beyond our control made our further participation impossible. To explain, San Diego has grown far beyond its original premise, morphing from what was originally a wonderful annual gathering of the comics world, into a world-renown pop culture and media festival. As such, it has seen rapidly escalating costs, and also a dramatic change in the demographics of its attendees. Neither of those changes worked to our advantage.”

He goes on to cast some blame on the fire marshall, but–surprisingly–also on the proliferation of off-sites. This is what he has to say:

“What made the situation nearly impossible, however, was that foot traffic in the exhibit hall declined dramatically last year. Even at its peak on Saturday afternoon, our end of the building (which was primarily comics) was uncrowded. The San Diego Fire Marshals were partially to blame, as they put much stricter controls on the number of badge holders allowed in the building at any given time. That might not have been such a bad idea, except that it amplified the harm already being caused by the incredible proliferation of off-site events that are now being set up for upwards of eight blocks all around the convention center. When you can see GAME OF THRONES, POKEMON, and hundreds of other exhibits across from the convention hall for free, why bother going in to the hall? Many fans did not.”

Wow, that’s quite an indictment of the current state of Comic-Con from his perspective. And you know what–in some ways, he’s kinda right. In just the nine years I’ve been attending SDCC, I’ve noticed huge change. And yes, I–along with many others–am quick to put a lot of the blame on that darn TWILIGHT film series and the legions of fans it brought to the convention; fans who–by my estimates–weren’t particularly interested in any of the comic book wares that vendors were offering. Heck, those fans didn’t seem to be interested in much else except for maybe some of those early CW tween shows. That’s when I remember camping out overnight in the Hall-H line became a common occurence. But the changes are bigger than that. Prices are escalating and Studios seem to be shoving the smaller comic book companies off the floor.

But I’m not gonna lie: I LOVE the off-sites. The absence of Nerd HQ this year is a real letdown (that one still hurts). But for me (and for thousands like me), off-sites add to the excitement that is Comic-Con. And in full disclosure, here on The Con Guy, we actively promote them — see our ever-growing list!

But what’s been the reaction to Chuck’s announcement? Predictably, many fans are really pissed off, angry and sad:

An Atom Bomb just hit #SanDiegoComicCon but did you even hear it? #sdcc17 #sdcc #comiccon #milehighcomicshttps://t.co/vM77poQ9Gf

Here are some other opinions on the subject:

“When I read his letter, it didn’t illuminate an underlying problem or reveal a sinister plot conspiring to his downfall. Instead, it showed me a crumudgeon that was not willing to change with the times. Blaming how the floor is laid out, the popularity of offsite events, the Hollywood presence and most importantly, the taste of fans, makes it sound like Chuck is a dinosaur cursing the meteorite that is plummeting to Earth. Change is going the hit the surface whether we like it or not, and blaming all the conditions around it makes Chuck sound like a sore loser.” Read his full article here >>>

Woah. This one almost entirely passed me by: this is big news, a damning statement on CCI, and a telling sign about con culture in general. https://t.co/9sAKBnV3cB

I spoke with one of the other prominent San Diego Comic-Con vendors this week who sorta agreed with Tony Kim, saying that Chuck needed to adapt.

I’m not quite that harsh, although I do believe there are definitely two sides to every story. I love the convention, and I love the giant Hall-H panels along with the big off-sites. But if pressed, I’ll always choose the smaller panels and the comic book booths over everything else. And if you look at the SDCC schedule, you’ll be reminded that Comic-Con DOES promote comic books tremendously — heck, last year there were well over 200 panels devoted to comic book-specific topics, including spotlights on creators, how-to instructional panels, and–of course–the Eisner Awards.

This is a discussion that will continue, and it’s one that deserves to be had. We can’t lose comic books from Comic-Con. That’s the lifeblood of every convention. There’s a scene in the movie SIDEWAYS (one of my favorite all-time films) where Miles (played by Paul Giamatti) asks Maya (beautiful Virginia Madsen) how she first “got into” wine–what sparked her interest. His exact question was, “So, what’s the bottle that did if for you?” He was asking what bottle of wine piqued her interest enough to start her on her lifelong love of wine. In comics, we can ask that same question: “What’s the comic that did for you?” For me, it was The Avengers #186 (1979), pencils by John Byrne and written by David Michelinie. It was my very first comic book, and I was hooked. I lost it somewhere through the years, but I found a copy at last year’s Comic-Con. It was an almost surreal moment — I was a kid all over again. I picked up that copy, but also the two issues after that (for 35 years, I’ve NEVER known how that cliffhanger ended!).

THAT, to me, is the heart and soul of Comic-Con. I firmly believe that comics are still at the center of SDCC. It’s the skeleton upon which everything else hangs. But I also notice the changes that are remaking SDCC… I love the big, exciting events, but let’s not lose our comics. Let’s not lose our lifeblood.

Of course, many fans may remember that back in 2014, Chuck said he was not returning. During the convention, he wrote this on his website:

“My best estimate is that, at our current rate of sales, we will suffer a loss of $10,000 at this year’s show. As much as I like being a part of this wonderful gathering, I simply do not have the money to be able to pay $10,000 out of my own pocket for the privilege of providing the fans here with comic books. After 42 consecutive years in a row, it may finally (at long last…) be time for me to bid San Diego good-bye, forever.”

Maybe, just maybe, he’ll be back. Maybe not this year, but I hope we see Mile High again. Or, in the very least, maybe some other comic shop will fill that footprint. We are seeing changes at the Cons–not all of them good, but not all of them bad.

Chuck, hope to see you again!